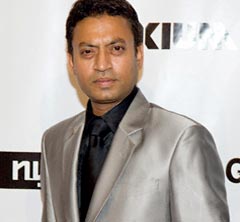 Irfan Khan's first stint with a Hindi film was a cameo role in Mira Nair's "Salaam Bombay", which was edited out in the final film. He kept himself busy with theatre and television till he appeared in the critically acclaimed film "Ek Doctor Ki Maut". Since then Irfaan Khan has featured in various mainstream Bollywood movies. Irfaan appeared as supporting actor in most of his movies but things changed when he got lead role in an English film "The Warrior" directed by London based director Asif Kapadia. The film "The Warrior" stormed in international film festivals in 2001 and Irfan Khan was noticed in a big way. In Bollywood, his first film as the lead actor was "Rog", which proved a flop at box office. Irfan Khan played the title role in the critically acclaimed film "Maqbool", which was an adaptation of Shakespear's story 'Macbeth'.

Irfan Khan won his first Filmfare Award in Best Villain category for his role in the film "Haasil", where he played the role of a student's union leader. Irfan appeared in another English film "The Namesake" which was one of the biggest hits overseas. Irrfan has also appeared in another international film "A Mighty Heart".