This biography of Feroz Khan introduces you with his personal profile and film background.
Bollywood : Indian Film Actors : Feroz Khan 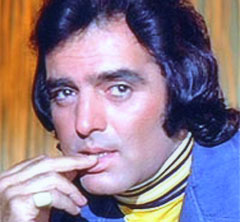 Mini Biography
Feroz Khan was born at Bangalore in India to an Afghan Father, Sadiq Khan and an Iranian mother Fatima. After schooling from Bangalore he shifted to Bombay and made his debut as the second lead in the film "Didi". Next few years Firoz Khan continued to play second lead hero in most of the movies. His first big hit film was "Oonche Log". In his next film "Arzoo", Feroz played a sacrificing lover. Firoz Khan won his first Filmfare Award as Best Supporting Actor for the film "Aadmi Aur Insaan".

Feroze Khan turned producer and director so as to improve his opportunity as a lead hero. Feroz Khan produced, directed and starred in the film "Dharmatma" which was the first Indian film to be shot in Afghanistan and was also his first blockbuster as producer, director and star. He was one of the many actors to appear in the cult classic horror film "Nagin" which also had his brother Sanjay in one of the leading roles. Throughout the 1970s and 1980s, he was the top Bollywood star in films and often directed and starred in many of his films. The movie "Qurbani" was the biggest hit of his career and also launched the singing career of Nazia Hassan. Firoz Khan took break from acting after his last film "Yalgar" and concentrated on production and direction. He launched his son Fardeen Khan with the film "Prem Agan" which was however a flop film.