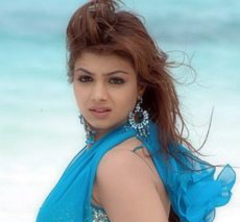 Mini Biography
Ayesha Takia was born at Mumbai (Bombay) in a mixed family. Her father is a Gujrati and her mother is an Anglo Indian. She grew up speaking Gujrati and English but learned Hindi and Telugu for her filmy career. Ayesha entered in glamour world through advertisements and her first advertisement was the famous "I'm a Complan Boy, I'm a Complan Girl" alongside Shahid Kapoor. Her first music video was Falguni Pathak's "Meri Chunar Udd Udd Jaye", when she was just fifteen. Ayisha Takiya drew the attention of the film industry with the video "Shake It Daddy" and film offers followed. Though Ayesha signed "Socha Na Tha" first but her first released movie was "Tarzan- The Wonder Car".

Ayesha Takyia won the Filmfare best debutant award in 2004 for her performance in "Taarzan". After that Ayesha acted in many films but most of them were unsuccessful at the box office. Ayisha Takia beautifully essayed the role of a young widow of Rajasthan living in a traditional joint family in the film "Dor". She was highly praised for her work in this film and went on to win Zee cine critics award for best actress. At present Ayesha is working in a number of films and some of her upcoming movies are-" Sehar Thaper, Blood Brothers ".