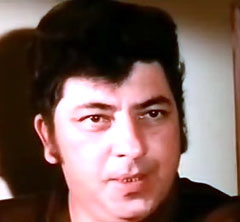 Mini Biography
Amjad Khan was born in Hyderabad to a legendry actor of 50's- Jayant. He entered the Hindi film Industry as a child artist with "Ab Dilli Dur Nahi". Before entering into films Amjed Khan was a theatre actor. His debut film was "Hindustan Ki Kasam". The film was made on the theme of Indo-Pak war of 1971. The role that immortalized Amjad Khan in Bollywood was 'Gabbar Singh' of "Sholay". 'Gabbar Singh' made Amzad Khan a household name. For the role of 'Gabbar Singh' Amjad Khan read "Abhishapth Chambal", a book on Chambal dacoits written by Taroon Kumar Bhaduri (father of actress Jaya Bhaduri). Post "Sholay" Amjad Khan acted in a number of movies in negative role opposite Amitabh Bachchan. "Parvarish", "Hum Kisi Se Kum Nahin", "Aakhri Goli", "Phool Khile Hain Gulshan Gulshan", "Muqadar Ka Sikander", "Kasme Vaade", "Heeralal Pannalal" and "Khoon Ki Pukaar" are some of those movies.

Amjad Khan also played many other unconventional roles. He played the role of helpless and deluded Wajid Ali Shah, who was nawab of Awadh, in the film "Shatranj Ke Khiladi". Amjad won critical acclaims for his performance in this film. Amzad Khan also played a positive role as friend of Amitabh Bachchan in the film "Yarana". In the film "Utsav" he portrayed the character of Vatsyana, the writer of Kamsutra, a treatise on art of love.

Besides acting in films he also tried his hand at directing films. In 1976, he met with a near fatal accident on the Bombay-Goa road, when he rammed his car into a tree while trying to avoid a boulder. The drugs administered to him for treatment caused a serious weight problem for the rest of his life. As a result of his increasing weight he died in 1992 after suffering from a heart failure at the age of 51.