Get the information about Esha Deol's profile and her film background by going through her biography.
Bollywood : Indian Film Actresses : Esha Deol 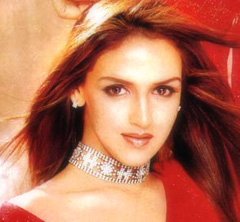 Esha Deol made her debut with the movie "Koi Mere Dil Se Pooche". The film was unsuccessful at box office but she went on to win Filmfare Best Debutant Award for her performance. After that a series of unsuccessful films followed. Isha Deol's first successful film at box office was "Dhoom". Since then she has given two more hit films "Kaal" and "No Entry". She was nominated for Filmfare Best Villain (Female) Award for her performance in "Ankahee". She also featured in Tamil film "Ayitha Ezhuthu" directed by Mani Ratnam. Esha Deol gave rocking performance in the movie "Yuva" opposite Ajay Devgan. Esha Deol is set to star in her mother's next directorial venture with Rekha and Abhishek Bachchan and also a film in which her mother and she will be starring together for the first time.