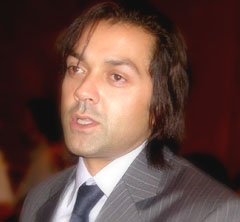 Mini Biography
Bobby Deol is son of the popular film star Dharmendra. He made his debut as lead hero with the film "Barsaat" directed by Rajkumar Santoshi. The movie was successful at box office. His next movie was "Gupt", which also a big hit and became one of the highest grossing films of the year. Bobby's performance in this film was appreciated by critics and fans. His other movies like "Aur Pyar Ho Gaya", "Soldier", "Dillagi", "Kareeb", "Badal", "Bichoo" and "Ajnabee" has mixed success.

Bobby Deol was nominated for the Filmfare Best Actor Award for his performance in the film "Humraaz". Though his next movie "23rd March 1931: Saheed" failed at box office, where he portrayed the character of real life freedom fighter Bhagat Singh, yet his performance was well appreciated by critics. Boby Deol played a villainous role in the movie "Shakalaka Boom Boom", which failed in India but did better business overseas. Bobby along with his elder brother Sunny Deol and father Dharmendra starred together for the first time in the film "Apne". The film opened to good reviews and did well in India and overseas. His following released films "Naqaab' and "Nannhe Jaisalmer" did not do well.

Bobby Deol is married to Tanya Ahuja and has two sons named Aryaman and Dharam.