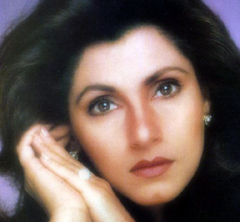 Mini Biography
Dimple Kapadia was born to a businessman Chunnibhai Kapadia. Dimple has a younger sister whose name is Simple Kapadia; she is also a film actress. She was discovered by legendry showman Raj Kapoor. Dimple Kapadia made her debut with the film "Bobby" opposite Rishi Kapoor. The film rocked the box office and they became star overnight. Dimple was just sixteen at that time. Soon after the success of her first film, Dimple married the super star Rajesh Khanna, who was fifteen years older than her. Dimple had left the films to raise her two daughters; Twinkle and Rinkie Khanna. Twinkle is now married to Bollywood star Akshay Kumar and Rinkie is an actress. Dimple Kapadia divorced her husband Rajesh Khanna after ten years of strained relationship.

After divorce, she returned back to mainstream with the film "Sagar" opposite Rishi Kapoor, her co-star of the movie "Bobby". Thereafter Dimple appeared in a number of films such as "Dil Chahta Hai", "Hum Tum Pe Marte hain", "Krantiveer ", "Pathreela Raasta ", "Gardish ", "Aaj Kie Aurat ", "Gunaah "and "Rudaali ".Dimple won National Award for her acting in the movie "Rudaali". It is said that she had an affair with Bollywood star Sunny Deol.