Know about Amol Palekar's Profile and his film background by going through his biography.
Bollywood : Indian Film Actors : Amol Palekar 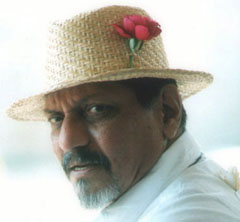 Amol made his debut in films with noted Marathi film "Shantata! Court Chalu Aahe" directed by Satyadev Dubey. He was cast by Basu Chatterjee in the movie "Rajnigandha", which led to many other such roles in middle-class comedies often directed by Chatterjee or Hrishikesh Mukherjee such as "Golmaal", "Chhoti Si Baat" and "Naram Garam". Amol Palekar turned from acting to film direction with the Marathi film "Aakriet". Since then he has directed many films which include "Ankahi", "Thodasa Rumani Ho Jaye", "Bangarwadi", "Daayraa", "Anahat", "Kairee", "Dhyaas Parva". His movie "Paheli" was India's official entry for the Oscar Awards in 2006 but did not make it to the final nominations.