Physical Traits
Bear macaque of India has a strong and muscular body. Its coat is covered with fur, which is dark brown in color. The tail of a Stump-tailed macaque is short and hairless. Even the face is devoid of any hair and is mottled with varying amounts of black and red skin. The young ones are born with red fur and as they grow, their fur starts turning into brown. 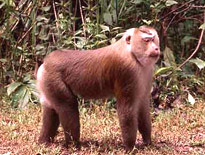 Bear macaque of India mainly survives on a diet of fruits, leaves and invertebrates.

Behavior
Stump-tailed macaques are gregarious primates, living in multi-male, multi-female groups. The groups follow strong matrilineal hierarchies, with the average group size comprising of 20 to 50 members. They are mainly diurnal creatures, which spend their time in trees as well as on the ground.

Mating Behavior
The gestation period of Stump-tailed macaque is between 166 days and 185 days, after which a single young one is born.

Status
Stump-tailed macaques are listed as Vulnerable by the IUCN.