Lion-tailed Macaque is one of the subspecies of macaque, found only in the Western Ghats of South India. Known by the scientific name of Macaca silenus, it has life expectancy of 20 years in the wild and upto 30 years in captivity. Lion-tailed macaques spend most of their time on trees and are excellent swimmers.

Physical Traits
The coat of Lion-tailed macaque is covered with dark-brown or black fur. One of its unique features is its silver-white mane, which stretches on from the cheeks to the chin, while surrounding the head. This mane has led to the macaque being named as the 'Bear Ape' also. The face of Lion-tailed macaque of India is free from any hair and is black in color. 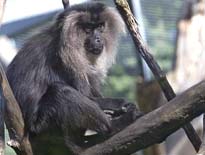 Diet
The diet of a Lion-tailed macaque comprises of indigenous fruits, leaves, buds, insects, small vertebrates and invertebrates. In case of shortage, they can turn to fruits, seeds, shoots, pith, flower, cone, mesocarp and other parts of many non-indigenous plants. In Indian zoos, they are given a diet of fruits, vegetables, sunflower seeds, granary bread, peanuts, maize and special primate dietary supplement pellets.

Mating Behavior
Lion-tailed macaque of India reaches the age of maturity 2.5 to 4 years after birth, depending upon its sex. Its mating period extends to the whole of the year. The gestation period is six months, after which a single young one is born.

Status and Threats
Lion-tailed macaques are one of the most rare as well as threatened primates. Presently, their population is estimated to be somewhere around 2,500. The greatest threat faced by Lion-tailed macaques is the deterioration of their natural habitat. Since they stay away from human settlements, this deterioration has led to a sharp decline in their number. At the same time, they are widely hunted for their meat and fur.

Natural Habitat
The natural habitat of the Lion-tailed macaque comprises of tropical dry forest and tropical rainforests of India.