Indian Weddings Home Remedies Ayurveda Vastu Yoga Literature
Indian leopard is one of 8-9 species of the leopards in the world. Know more about the leopard of India.
Home : Wildlife in India : Indian Wild Animals : Leopard

Indian leopard is one of the 8-9 valid leopard subspecies found throughout the world. Known by the scientific name of Panthera pardus, it is the fourth largest of the four 'big cats' of the Panthera genus. At the same time, leopards are also the fifth largest of all cat species. The name 'Leopard' has been derived from a combination of two Greek and Latin words leo and pard, 'leo' meaning lion and 'pard' meaning panther. This name was given to the animal since it was initially believed to be crossbreed of a lion and a panther.

Physical Traits
As far as the length of the Indian leopard is concerned, it may be anywhere between one meters and two meters. Their average weight hovers somewhere around 30 kg and 70 kg (65 lbs to 155 lbs). Leopards have a heavy and sturdy body and their head is larger in proportion to their body. The coat of a leopard is covered with rosettes and they can climb trees with effortless ease. The cubs of a leopard have longer and thicker fur than the adults and even their pelage is grayer. 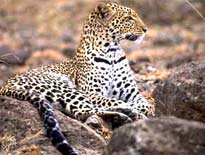 Indian leopards are nocturnal creatures and are considered to be one of the most surreptitious animals. They can easily make themselves undetected, even while living proximate to human settlements. Leopards are very good swimmers, but lead a solitary life. Occasionally, one can find them roaming in a group of 3 to 4 animals. They have an acute sense of hearing, along with sharp eyesight.

Diet
Leopards are carnivores and eat almost every animal, ranging from monkeys to reptiles to fish. Infact, it is believed that they hunt from amongst 90 species of animals. Injured, sickly or struggling leopards, with a shortage of prey, may even hunt humans.

Mating Behavior
The mating season of leopards depends upon the areas they inhabit. For example, the leopards of India mate throughout the year while those in Siberia mate from January to February. Their estrous cycle lasts about 46 days and the female usually remains in heat for 6-7 days. They give birth to 2-3 cubs at a time, out of which 1 or 2 survive in most of the cases. Three months after being born, the cubs start joining their mother in hunts and live with her for the next 18 to 24 months.

Natural Habitat
Till some centuries back, leopards used to roam around in almost all parts of Africa and southern Asia. However, today, their habitat has been reduced to Sub-Saharan Africa, Asia Minor, the Middle East, India, Pakistan, China, Siberia, much of mainland South-East Asia and the islands of Java and Sri Lanka.

Current Status and Threats
The worldwide population of leopards is considered to be around 50,000. Nevertheless, the population of the 'Big Cat' has been decreasing at quite a rapid pace in all the countries, including India. The major reasons for this are their large-scale poaching as well as destruction of their natural habitat by humans. The subspecies that have been declared as endangered are Amur, Anatolian, Barbary, North Chinese and South Arabian Leopards.

Sub-species
Even though it is said that there are over 30 species of leopard, so far, only 8-9 have been found to valid. These are: