Clouded leopards belong to the Neofelis genus and have the scientific name of Neofelis nebulosa. The average lifespan of a clouded leopard is 11 years in the wild. However, in cases of captivity, it may go upto 17 years.

Physical Traits
A clouded leopard grows to a length of 60 to 110 cm (2 ft to 3 ft 6 in). Its weigh may be somewhere between 11 and 23 kg (25 lbs and 50 lbs). The coat of Indian leopards is tan in color and has large, erratically shaped, dark-edged ellipses marks on it. Since the shape of the ellipses resembles clouds, the animals have been given the name of 'Clouded Leopards'. Their build is huge and their canine teeth are the longest amongst all the cat species.

The short flexible legs of the Clouded leopard of India, along with its large paws and sharp claws, make it an excellent tree climber. Its tail is almost as long as its entire body, which serves as a further support in climbing. The cubs of clouded leopard do not have dark ellipse, rather their entire body is dark in color. 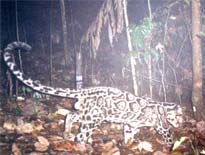 The clouded leopard is a carnivore and mainly survives on arboreal and terrestrial mammals, primarily consisting of gibbons, macaques and proboscis monkey. Its other prey includes small mammals, deer, birds, porcupines, and domestic livestock.

No Relation to Leopard
Clouded leopard has no close relation to leopard and comes under a separate genus, known as Neofelis.

Natural Habitat
Clouded leopards prefer to stay in tropical and subtropical forest of India, with an altitude of over 2,000 meters. One can also find the animal inhabiting Indian mangrove swamps and grassland. Their natural habitat stretches through southern China, the eastern Himalayas, northeast India, and Southeast Asia. It is believed that the species has become extinct in Taiwan.

Sub-species
Earlier, the clouded leopard was believed to have four subspecies, namely:
However, a few years back, molecular genetic analyses have put a strong case for inclusion of two more species in this category, namely Neofelis nebulosa (found in mainland Asia) and Neofelis diardi (found in Indonesian archipelago).

Behavior
There is hardly any information about the behavioral traits of the Clouded leopard in the wild. However, it is believed that they are solitary creatures, which can be seldom seen in groups.

Mating Behavior
Female Clouded leopard attains maturity after it reaches the age of two years. After the gestation period, which lasts for about 85 to 93 days, it gives birth to cubs, which may be 1 to 5 in number. The cubs get active within 5 weeks of birth and become independent after around 10 months.