The Indian subcontinent boasts of serving as the natural habitat of a large and varied wildlife. We can find some of the most magnificent as well as the rarest wildlife species of the world in the country. The beauty and variety we see in the jungles of India is difficult to be expressed in words. However, the past few decades have seen the greed and negligence of human beings working to the detriment of this rich wildlife. Large-scale poaching, habitat destruction and conflict with humans have resulted in a rapid decline in the population of most of the wild animals and birds.

Conservation of Indian wildlife was not given the requisite importance for a long time. However, the government as well as the people slowly and gradually understood their responsibility in this context. Today, efforts are being made towards wildlife conservation in India, to preserve this natural wealth. Numerous wildlife conservation projects have been undertaken in India, both at the government as well as the individual level, to protect the rich wildlife of the subcontinent.

Threats to Wildlife
The major threats being faced by the wildlife in India are: 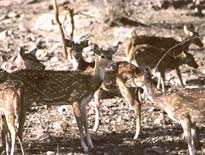 Project Tiger
Indian government commenced the 'Project Tiger' in 1973-74, with the objective of restraining as well as augmenting the declining population of tigers. Under the project, nine wildlife sanctuaries were taken over and developed into tiger reserves. These reserves were developed as exact replicas of the varied terrains of the country, with their core area being free of any human movement. With time, the number of sanctuaries under the ambit of 'Project Tiger' was increased and by 2003, it had been increased to 27. Along with providing a natural habitat to the tiger, these reserves offer them protection against poaching also. The results are for all to see. After undertaking the project, the population of tigers in India has risen considerably.

Wildlife Conservation Society (WCS)
The current WCS program in India was started in 1986, as a single tiger research project at Nagarhole National Park. From a single project, WCS has developed into a comprehensive portfolio of activities related to wildlife. The activities undertaken under the adage of WCS include scientific research, national capacity building, policy interventions, site-based conservation and developing new models of wildlife conservation.