Bonnet Macaque, an Old World monkey, is also known by the scientific name of Macaca radiata. Found only in India, it has been named so because of its physical appearance. Indian Bonnet macaques have a cap-like whorl of hair on their head, which radiates outward from the center. Since the coil of hair resembles a hat, they have been named as Bonnet macaques. The fur on their body is dusky brown to golden yellow in color. The ears as well as the lower lip are black. The face of a female Bonnet macaque is red in color.

Natural Habitat
Bonnet macaques are found only in India, occupying wet lowland to dry deciduous forest, at a height of upto 2100 m. 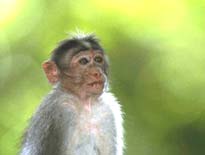 Bonnet macaques of India are quite sociable and are seen mostly in groups, which comprise of both males as well as females. There can be upto 12 males in a group and the number of females can go upto 15. They live in their own marked territory and defend it very fiercely. Diurnal in nature, Indian Bonnet macaques frequently sleep in fig trees near human settlements or tall trees with dense foliage.

Mating Behavior
The gestation period of female Bonnet macaque is approximately 165 days. The number of offspring born is only one, which weighs around 400 gm at the time of birth.

Status
There is a large population of Bonnet macaques in India. Thus, they are not listed as an endangered species.