Macaques are considered to be the second most-widespread species in the world, after humans. Their range stretches on from northern Africa to Japan. Macaques comprise of 22 species in toto, out of which seven can be found in India also. Since a number of macaque species lack tails, they are also known as apes. Various species of the Indian macaque are used for experimental purposes. In the following lines, we have provided information about the various species of Indian macaques:

Lion Tailed Macaque
Lion-tailed Macaque is one of the subspecies of macaque, found only in the Western Ghats of South India. Known by the scientific name of Macaca silenus, it has life expectancy of 20 years in the wild and upto 30 years in captivity. Lion-tailed macaques spend most of their time on trees and are excellent swimmers.

Long Tailed Macaque
Long-tailed macaque is also known by some other names, like the Crab-eating Macaque or the Cynomolgus Monkey. It is an arboreal macaque, belonging to the Macaca genus, and has the scientific name of Macaca fascicularis. A native of the Southeast Asia, the Crab-eating macaque of India has also been flown into outer space. 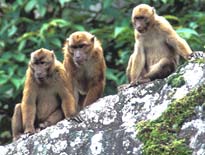 Rhesus Macaque
A typical macaque, the Rhesus monkey of India is believed to be one of the best species of the Old World monkeys. It is an excellent swimmer and enjoys water. Rhesus macaques are quite comfortable around humans and have the tendency to move from rural to urban areas in search of easy food. The average lifespan of Rhesus macaques is approximately 15 years in the wild.

Bonnet Macaque
Bonnet Macaque, an Old World monkey, is also known by the scientific name of Macaca radiata. Found only in India, it has been named so because of its physical appearance. Indian Bonnet macaques have a cap-like whorl of hair on their head, which radiates outward from the center. Since the coil of hair resembles a hat, they have been named as Bonnet macaques.

Assam Macaque
Assam Macaque is a diurnal primate, which inhabits the regions stretching from Nepal to Vietnam and Southern China. It is yellowish to dark brown in color and has a hairless face. The color of the face is red in case of adults. Assam Macaques are also known by the name of Himalayan Macaque and Hill Monkeys in India.

Arunachal Macaque
Arunachal Macaque, scientifically known as Macaca munzala, is a native primate of Arunachal Pradesh state of northeastern India. It is called by the local population as Munzala, meaning monkey of the deep forest. Arunachal Macaques were discovered by the Indian scientists in the year 2004 only.

Other Species of Macaque
The other macaque species, not found in India, comprise of: