Long-tailed macaque is also known by some other names, like the Crab-eating Macaque or the Cynomolgus Monkey. It is an arboreal macaque, belonging to the Macaca genus, and has the scientific name of Macaca fascicularis. A native of the Southeast Asia, the Crab-eating macaque of India has also been flown into outer space.

Physical Traits
An adult Long-tailed macaque grows to length of approximately 38-55 cm. However, the arms and legs are comparatively quite short. The tail, which is longer than the body, grows to a length of 40-65 cm. Females are shorter than males (5-9 kg), weighing about 3-6 kg. A newborn macaque weighs only 350 g and has black fur. As it grows older, the fur turns to yellow-green, gray-green, or reddish-brown color.

Connection with Science
Crab-eating macaques have been used to a large extent by researchers in their medical experiments. The primate is a carrier of B-virus (Herpesvirus simiae). At the same time, it is believed to be a possible vector for monkey pox also. 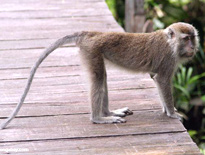 Long-tailed macaque is a social animal, which is usually found in groups of anywhere between five and sixty members. On an average, the number of female members in a group is twice or thrice the number of males. The group size depends on the level of predation and availability of food. The males keep on moving in and out of the group, but female members remain attached to the same group throughout their life. The high-ranking males of a group are generally more successful at reproduction. At the same time, the high-ranking females are usually better at raising surviving offspring.

Mating Behavior
The gestation period of Indian Crab-eating macaque is 167 to 193 days and the number of offspring born is one.

Natural Habitat
The natural habitat of Indian Cynomolgus monkeys is not very restricted. It extends to primary lowland rainforests, secondary rainforests, riverine and coastal forests of nipa palm and mangrove of India. They can easily adjust with humans and will not encounter problems while settling around a human inhabitation also. Long-tailed macaques are found primarily in Malay Archipelago islands of Sumatra, Java and Borneo, the islands of the Philippines, and the Nicobar Islands of India. The species was also introduced in Anggaur Island of Palau, western New Guinea, Mauritius and Hong Kong.

Diet
Crab-eating macaque of India eats a wide variety of animals, plants, and other materials. Approximately 60 to 90 percent of its diet comprises of fruits and seeds and the rest includes leaves, flowers, roots and bark. The macaque also devours vertebrates, invertebrates and bird eggs.

Threat to Biodiversity
Long-tailed macaque can become a threat to the biodiversity of the areas where it is non-native. However, the same does not apply to the native habitat of the primate.

Status
Cynomolgus Monkeys are ranked as the third largest of all the primate species, after humans and Rhesus macaques. IUCN Red List has categorized them in the 'Lower Risk' category and CITES has listed them in the Appendix II