A typical macaque, the Rhesus monkey of India is believed to be one of the best species of the Old World monkeys. It is an excellent swimmer and enjoys water. Rhesus macaques are quite comfortable around humans and have the tendency to move from rural to urban areas in search of easy food. The average lifespan of Rhesus macaques is approximately 15 years in the wild. In captivity, a female rhesus macaque may survive for 20 to 25 years, while a male may survive only for 15 to 20 years.

Physical Traits
A male Rhesus macaque grows, on an average, to a length of 50 to 55 cm and weighs around 7 to 8 kg. The female, on the other hand, is a little shorter, with length of 45 to 55 cm and weight of 5 to 6 kg. The tail is of medium length, bordering somewhere between 20.7 and 22.9 cm. The coat of Indian Rhesus macaques is brown or gray in color. Their face is pink in color and is devoid of hair. There cheeks of the macaque are pouch-like, where it can store its food temporarily. 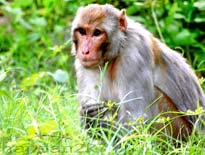 Rhesus macaques are widely made use of in medical and biological research. One of the major reasons for this is that they can be easily raised in captivity. Some of the experiments where Rhesus Macaques were used include experiments on maternal deprivation carried out in the 1950s. During 1950s and 1960s, they were launched into space by NASA. Rhesus macaque is also the first cloned primate in the world.

Diet
Rhesus monkey of India is mainly herbivorous and survives on a diet of leaves, pine needles, roots and occasionally insects or small animals.

Behavior
Rhesus monkeys of India are companionable creatures and tend to form groups easily. Usually, a group comprises of both males as well as females. Though, on an average, a group or troop comprises of 20 members, it may go upto 180 members in extreme cases. The social hierarchy is matriarchal and the number of females is generally more than the males. The responsibility of the young ones, along with territory surveillance, is shared by all the members of the troop. Rhesus macaques are quite vocal by nature and are both arboreal and terrestrial.

Mating Behavior
There is no particular mating period of Rhesus macaques, it may occur at any time of the year. The gestation period is between 135 and 194 days. The age of maturity in case of female Rhesus macaques is three years and in case of males, it is four years. Rhesus macaques are sexually dimorphic.