Indian subcontinent has a rich and varied biodiversity to boast of. Infact, the country is home to some of the most rare as well as magnificent wild animals. Most of the wild animals of India are being protected from poaching as well as habitat loss through the numerous national parks and wildlife sanctuaries. Indian culture preaches respect for each and every form of life, including wildlife. Still, greedy individuals as well as the ever-increasing population are putting pressure on the peaceful existence of Indian wild animals. In this section, we have provided information on the following wild animals living in India:

Indian Asiatic Lion
Asiatic Lions once used to roam around the area, stretching from northern Greece, across Southwest Asia, to central India. However, today the natural habitat of the majestic animal has been reduced to the Gir forests of India only, making the Asiatic Lion almost synonymous with the Indian Lion. 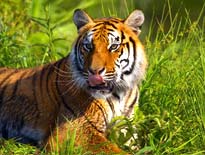 Bengal tiger is a subspecies of tiger, which is found in the Bengal region of the Indian subcontinent. One of the most common tiger subspecies, it is also found in a number of other Asian countries, like Bangladesh, Nepal, Bhutan, Myanmar, Tibet, etc.

Indian Black Bear
Indian black bear is also known by the names of Asiatic Black Bear (Ursus thibetanus), Tibetan black bear, Himalayan black bear and Moon bear. They grow to a length of approximately 4 to 6 feet, right from the nose to the tail.

Indian Black Buck
Indian black buck is also known by a number of other names like Kala Hiran, Sasin, Iralai Maan and Krishna Jinka. The scientific name of the black buck antelope is Antilope cervicapra and it natural habitat is the Indian subcontinent.

Indian Camel
The camels found in India are the single-humped camels, also known as the Dromedary camels. Long-curved neck, deep-narrow chest and a single hump characterize the Indian camel.

Indian Clouded Leopard
Clouded leopards belong to the Neofelis genus and have the scientific name of Neofelis nebulosa. The average lifespan of a clouded leopard is 11 years in the wild. However, in cases of captivity, it may go upto 17 years.

Indian Deer
The name 'Deer' is given to the ruminant mammals belonging to the family Cervidae. They are one of the most beautiful creatures on this earth and extend to approximately 34 species.

Indian Elephant
Indian elephant, known with the scientific name of 'Elephas maximus indicus', is a subspecies of the Asian Elephant. It is mainly found in the Indian subcontinent, that to in the scrub forested areas.

Indian Langur
Indian langurs are lanky, long-tailed monkeys, having bushy eyebrows and a chin tuft. They have a black face and their body color ranges from gray to dark brown to golden.

Indian Leopard
Indian leopard is one of the 8-9 valid leopard subspecies found throughout the world. Known by the scientific name of Panthera pardus, it is the fourth largest of the four 'big cats' of the Panthera genus.

Indian Macaque
Macaques are considered to be the second most-widespread species in the world, after humans. Their range stretches on from northern Africa to Japan. Macaques comprise of 22 species in toto, out of which seven can be found in India also.

Indian Red Panda
Red panda is a beautiful animal, found in only some other countries of the world, including the Indian subcontinent. Scientifically known as Ailurus fulgens, it is slightly bigger than the domestic cat and founds a mention in the list of endangered species.

Indian Rhinoceros
Indian Rhinoceros holds the distinction of being the fourth largest animal, after the three elephant species. Known by the scientific name of Rhinoceros unicornis, the animal is found in only two places in the world, Assam (India) and Nepal.

Indian Snow Leopard
Snow leopard is a native animal of mountain ranges of central and southern Asia, including India. It is also known as Ounce and has a scientific name of "Panthera uncia". Snow leopards can live for a maximum of 18 years in then wild.

Indian Striped Hyena
Striped hyena belongs to the Hyaenidae family and is scientifically known as Hyaena hyaena. Strongly related to the Brown hyena, it is basically a solitary creature. The average lifespan of striped hyenas hovers somewhere around 10 to 12 years in the wild.

Indian Wild Ass
Indian wild ass, also known as khur, is one of the subspecies of wild ass belonging to southern Asia. Its scientific name is Equus hemionus khur. Wild ass of India has an average age of 20-25 years.

Indian Wild Boar
Wild boar is considered to be the wild antecedent of the domestic pig of the Indian subcontinent. It belongs to the Suidae biological family, which also includes the Warthog and Bushpig of Africa, the Pygmy Hog of northern India and the Babirusa of Indonesia.