Striped hyena belongs to the Hyaenidae family and is scientifically known as Hyaena hyaena. Strongly related to the Brown hyena, it is basically a solitary creature. The average lifespan of striped hyenas hovers somewhere around 10 to 12 years in the wild. When kept in captivity, they can live longer also.

Physical Traits
The body coat of a striped hyena is covered with grayish-brown fur. Its legs, torso, head and back have black vertical stripes all over, while, muzzle and ears are totally black. There is also a medium sized mane on its neck, shoulders as well as the back. When threatened, a striped hyena erects the hair on its mane, making itself look 30-40 percent bigger than it actually is. This activity is also used in displays against other striped hyenas.

The underside of its neck is covered with a black throat patch. The legs are quite long and the tail is feathery, reaching the hocks. Striped hyena of India may grow to a length of 4 to 5 feet (1.2 to 1.45m). It stands tall at a shoulder height of 2.2 to 2.5 feet (66 to 75cm). Striped hyenas weigh between 57 and 90 pounds (26 and 41 kg). The size of a male and a female striped hyena does not differ too much. Quite similar to a number of other hot climate animals, their ears also radiate heat. 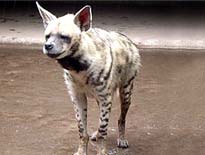 Striped hyenas are found occupying the tropical savanna, grasslands, semi-deserts, scrub forests and woodlands. In the Indian subcontinent, they inhabit open country, seashores as well as forests. Their geographical range also stretches on form Morocco and Senegal to Tanzania, across Asia Minor, the Arabian Peninsula, all the way to Iran and Pakistan, apart from India. Striped hyenas are believed to have become extinct in Europe. However, they can be sporadically spotted in Anatolia and Turkey.

Behavior
Striped hyenas are nomads by nature and move from one water hole to another. Still, they never venture more than 6 miles from their previous water hole. Hyenas are not gregarious creatures and live mostly in isolation. At times, one can find them congregating in small family groups. Striped hyenas of India can be frequently seen seizing and shaking each other by the neck in mock fighting rituals.

Mating Behavior
Female striped hyenas attain maturity when they reach 2-3 years of age. Their estrous cycle lasts for 45 to 50 days and they can mate throughout the year. The gestation period is 88 to 92 days and the number of young ones may be anywhere from 1 to 5. The usual number of cubs is two and they start eating meat after 30 days.

Status
Striped hyenas are included in the list of 'Near Threatened' species. The exact population of the striped hyenas of India is not known.

Threats
Striped hyena faces no threat from natural predators, since it does not have one. Their main threat is from humans, with whom they constantly come into conflict. Striped hyenas may make human beings, mainly children, and livestock their target. This is the main reason why they are poisoned and trapped by people. Striped hyena of India is also poached since its parts are believed to have curative properties. Last but not the least, it is facing the threat of habitat destruction.