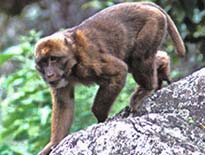 Arunachal Macaque, scientifically known as Macaca munzala, is a native primate of Arunachal Pradesh state of northeastern India. It is called by the local population as Munzala, meaning monkey of the deep forest. Arunachal Macaques were discovered by the Indian scientists in the year 2004 only. Biologists from the Nature Conservation Foundation were the ones to discover it during an expedition to the high altitude regions of Arunachal Pradesh.

Infact, the first primate found after the discovery of Indonesian Pagai Island Macaque in 1903, is the Arunachal Macaque of India only. It is a large macaque, with a brown coat and a short tail. The face is very dark and the body is compactly built. Arunachal Macaque bears close resemblance to the Assam Macaque and the Tibetan Macaque. It is usually found inhabiting areas situated at an altitude of 2000 m to 3500 m.

The orange-buff crown patch of the Arunachal Macaque of India, adorned with a dark wedge, differentiates it from the other macaque species. Then, there is the prominent ruff and the prognathous skull that add to the distinction. Last but not the least, the primate also has dense white fur on the underside.