Indian Rhinoceros holds the distinction of being the fourth largest animal, after the three elephant species. Known by the scientific name of Rhinoceros unicornis, the animal is found in only two places in the world, Assam (India) and Nepal. The Great Indian rhinoceros is a brilliant swimmer and has an acute sense of smell and hearing. Its maximum speed reaches 55 km/h, that to for a short period of time.

The only drawback of the Indian rhino, also known as the Great One-Horned Rhinoceros, is that its eyesight is quite poor. The sheer size of the rhinos has resulted in a few natural enemies. They may be attacked by tigers, but there are hardly any recorded incidents of a tiger killing a full-grown Indian rhino. However, they may kill unguarded calves at times. 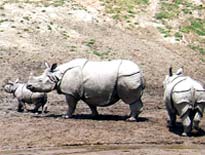 Rhinos have a very thick coat, which is silver-brown in color and have the minimal of body hair. The shoulders as well as the upper part of the legs have wart-like bumps throughout. Male rhinos are larger than the females, with their weight being somewhere around 2260 to 3000 kg. The average height of an Indian rhinoceros is 1.70 m (5.7 feet) and its average length hovers around 3.50 m (11.7 feet). As the name suggests, the Great One-Horned Rhinoceros has a single horn, which grows to a length of 20 to 101 cm. It is present in both males as well as females and starts growing around 6 years after birth.

Natural Habitat
The Great Indian rhinoceros is usually found inhabiting the tall grasslands and forests in the foothills of the Himalayas. Presently, it is found only in India (Assam) and Nepal.

Behavior
Indian Rhino is basically a lonely and solitary creature and can be seldom found forming groups. The only exception to this behavior consists of groups of mothers and calves and breeding pairs. A male rhino of India usually has a home range, within which it lives. The range usually stretches from 2 to 8 sq km and may overlap with that of some other male.

During mating season, dominant males will not tolerate any other male crossing their territory. If such a thing happens, dangerous fights are bound to ensue. Indian rhinoceros are mainly diurnal creatures and are quite active during the day. During daytime, you can spot them wallowing in lakes, rivers, ponds, and puddles. Through this process, they try to cool themselves.

Mating Behavior
The age of maturity of the Indian rhinoceros differs in males and females. A male rhino starts breeding at the age of nine, while a female rhino attains maturity after reaching five years of age only. When the mating season of a female approaches, she whistles to inform the males about the same. The mating season is also a season for dangerous fights between the male rhinos, which may sometimes result in death.

The gestation period is 16 months, after which a single calf is born. The interval between the births of two calves is around 3 years. A young rhino stays with its mother for several years after the birth.

Status
Indian rhinos found a mention in the list of the endangered species. Their population had been reduced to less than 100 in the early 20th century. Though, since then their population has increased, they are still under a threat of extinction. Presently, the population of the Indian rhinoceros is believed to be less than 25000.

Threats and Protection
One of the major threats facing the rhinos of India is their large-scale poaching for the horn. The other threats include habitat deterioration. The Indian and Nepalese governments have taken a number of steps, with the help of the World Wildlife Fund (WWF), to protect the Great Indian Rhinoceros.

National Parks
The Great One-Horned Rhinoceros is mainly found in the following national parks of India: