The camels found in India are the single-humped camels, also known as the Dromedary camels. Long-curved neck, deep-narrow chest and a single hump characterize the Indian camel. The hump is used by the camels as reservoir of fatty tissues. In times of scarcity, the tissues are metabolized and the camel receives energy. The size of the hump is not the same in all the camels. It differs from one camel to another, depending upon its nutritional state. In times of starvation, the hump can get reduced to almost a non-existent size.

Indian dromedary camels have a heavy growth of hair on throat, shoulder, and hump, which is longer than the rest of the body. On an average, the camels in India live for a period of 40 to 50 years. They are widely used by the people of Rajasthan as a means of transportation. Infact, the camels are known as the 'Ship of the Desert'. They are used for carrying goods as well as people. Indian camels also provide humans with milk, meat, wool, leather and fuel (from their dried dung). 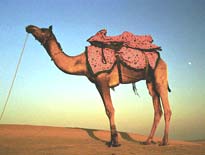 One can mainly find camels in the desert, dry arid regions of the country, especially the state of Rajasthan.

Behavior
Dromedary camels can be usually seen in groups, consisting of anywhere between two to twenty members. In every group, there is one male member who dominates the rest of the members, which comprise of females, sub-adults and young ones. While moving in a group, one can see the dominant male directing the group from the rear, while the female members lead at the front.

Mating Behavior
Indian camels attain maturity at the age of 4 to 5 years. They give birth to one offspring at a time and the gestation period is around fifteen months. The young ones are raised by their mother for a period of two years after their birth, after which they attain adulthood.

Camels have the ability to endure wide changes in their body temperature as well as water content. Their body temperature may vary as widely as being 41 deg C (106 deg F) in the daytime and being 34 deg C (93 deg F) at night. Only when they cross this limit do they begin to sweat, thus helping them save upto five liters of water in one day. Indian camels can cope up with as much as twenty-five percent weight loss, caused by sweating. The thick coat of a camel reflects sunlight and serves as insulation from the heat of the sand.