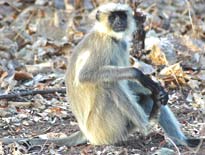 Indian langurs are lanky, long-tailed monkeys, having bushy eyebrows and a chin tuft. They have a black face and their body color ranges from gray to dark brown to golden. The small and lean body of an Indian langur is complimented with long hands. The term langur means 'having a long tail' and the name suits the animal perfectly. The natural habitat of the langur comprises of humid forests, mangrove swamps and wooded terrains of India. In the following lines, we have provided information about the main Indian langur species:

Golden Langur
Golden Langur, or Gee's Golden Langur, is known by the scientific name of Trachypithecus geei. An Old World monkey, it was first noticed by the scientific community in the 1950s only. In the Indian subcontinent, Golden langurs are found mainly in the foothills of the Himalayas, along the Assam-Bhutan border. The langurs are considered to be sacred by the Himalayan people. The coat of Indian golden langurs is covered with rich golden to bright creamish hair. The face is black and they have a very long tail, which may measure upto 50 cm in length.

Hanuman Langur
Hanuman Langur is believed to be one of the Old World monkeys, belonging to the Semnopithecus Genus. They comprise of 15 subspecies and are terrestrial in nature. Earlier hanuman langurs were believed to comprise of a single species. However, now they are recognized as seven distinct species. Hanuman langur is also known by the name of Gray Langur, Entellus Langur and Common Indian Langur.