Deccan plateau is situated to the south of the Indo-Gangetic plain and stretches over an area of approximately 14,21,000 sq km. Over 43 percent of India's landmass comprises of the plateau, which spreads over to eight states. Covered by ancient forests, which are older than the Himalayas, the plateau is home to a rich wildlife, which includes animals like Elephants, Tiger, Gaur and Buffalo, along with a wide variety of birds. The dense forests of the Deccan plateau are fed by a number of rivers, namely Narmada, Tapti, Mahanadi, Indravati and Godavari.

There are as many as 27 areas in the Deccan region that have been earmarked as protected areas for the Indian wildlife. The habitats of these areas are basically of three types, those comprising of deciduous forests, thorn forests and scrublands. Infact, Deccan peninsula has some of the largest tracts of deciduous forests in the country. Along with these areas, there are also pockets of semi-evergreen and evergreen forests, which are found mainly in the mountain range known as the Eastern Ghats. 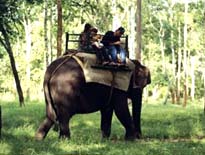 BR Hills National Park
The main attractions of the park include Gaur, Chital, Sambhar, Bear, Elephant, Panther and Tiger. There are also over 200 species of birds in the park, such as Racket-tailed Drongo and the Crested Eagle.