Indian black bear is also known by the names of Asiatic Black Bear (Ursus thibetanus), Tibetan black bear, Himalayan black bear and Moon bear. They grow to a length of approximately 4 to 6 feet, right from the nose to the tail. The small eyes of the bear, along with its rounded ears, a long snout, a large body, a short tail, and shaggy hair, differentiate it from the other types of bears. The small shoulder hump, a furry rear instep, a concave facial contour, small and curved claws and narrow ears further accentuate the difference. Last but not the least, Asiatic black bear also has a whitish V-shaped breast patch, not found in the other bear species of India.

The male black bear weighs between 220 and 480 pounds, while the females are110 to 275 pounds in weight. The senses of the Himalayan black bears of India are greatly developed and they boast of almost twice the hearing sensitivity possessed by humans. Black bears have colored vision and their eyesight is very sharp. Even their olfactory senses (ability to smell) are highly evolved. The mating season of the Himalayan black bears is usually from late May to early July. They give birth to two cubs at a time, which stay with the mother for almost seventeen months. 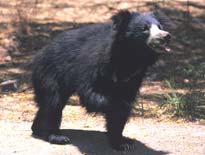 Indian black bears are omnivorous. Their diet depends upon the season as well as the availability of food. The fall season is the time for having acorns, chestnuts, walnuts, and other fatty food. In spring season, they survive on a diet of bamboo, raspberry, hydrangea, and other plants, along with rodent's caches of acorns. Summer season is perfect for having raspberries, cherries, grasses and ants. Asiatic black bears are also known to attack livestock at times.

Status and Threats
Asiatic black bear is listed as endangered on the World Conservation Union's (IUCN's) Red List of Threatened Animals. One of the major reasons that have contributed to the declining population of black bears is rampant deforestation and habitat loss. Asiatic black bears also face threat from farmers, who kill them in order to protect their livestock.