Red panda is a beautiful animal, found in only some other countries of the world, including the Indian subcontinent. Scientifically known as Ailurus fulgens, it is slightly bigger than the domestic cat and founds a mention in the list of endangered species. Indian red panda bear is quite apt at climbing trees and is mainly herbivorous. It is also known as the Red fox or the Common panda and is native to the Himalayan ranges of India. A one of its kind animals, Red panda is believed to be a living fossil. The only other fossil close to the panda is that of Parailurus, which lived 3 to 4 million years ago. The lifespan of a Red Panda may range from nine years to fourteen years. 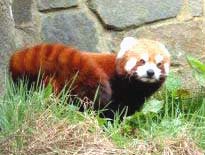 Red fox grows to a length of 50 to 60 cm. Its tail is very long; measuring somewhere around 30 to 60 cm. Male pandas are larger than the females. The weight of a male panda is between 4.5 kg and 6.2 kg, while that of a female is between 3.7 kg and 4.5 kg. The upper part of their body is covered with long and soft, reddish-brown fur. On the lower parts of the body, the fur is black in color. The face is covered with tear markings and the tail is ringed and very bushy. The short and black legs of a red panda are covered with thick soles, which serve as an insulation from snow.

Behavior
Common pandas of India are basically nocturnal creatures, which are found resting in tree branches and hollows during the day. They are solitary creatures and you will seldom find them roaming around in groups. Except for some twittering and whistling sounds, Red pandas hardly communicate with each other. In case of any threat, they either hurry into an inaccessible rock column or a tree or attack with their razor-sharp claws.

Natural Habitat
Red panda is usually found in mountainous regions of India, at an altitude of more than 1800 m. They are very sensitive to heat and cannot tolerate temperatures over 25 deg C. Red Pandas are native to southeastern Asia, Himalayan Mountains in Nepal, southern Tibet, China, Bhutan, northeast India, highlands of Myanmar, Gongshan Mountains of Yunnan China and Hengduan Mountains of Sichuan China.

Diet
The diet of Indian red fox bear mainly (2/3rd) consists of bamboo. The reason for this is that a panda cannot digest cellulose. The other constituents of its diet include berries, fruit, mushrooms, roots, acorns, lichen, grasses, young birds, eggs, small rodents and insects. When they are in captivity, red pandas willingly eat meat also. The diet of a red panda contains a very small amount of calories and because of this reason; the animal rarely does anything other than sleeping and eating.

Mating Behavior
Red pandas of India attain maturity only at the age of 2 to 3 years. Their mating period stretches on from the end of December to the middle of February. The gestation period lasts for 112 to 158 days, after which the female gives birth to, between one and four, young ones. Usually the young ones are born during the period starting at the end of May and lasting upto the beginning of July. Even the timing of birth of all the young ones is more or less the same, between 4:00 pm and 9:00 am. The nest of an Indian red panda bear is generally located in a hollow tree or a rock column. Only five months after their birth do the young ones become totally independent. As the next mating season approaches, the mothers abandon their babies.

Status
Indian Red panda bear is under great threat of extinction. The main reason for the declining population is the disintegration of its natural habitats, along with its specific diet needs. At the same time, Indian red fox animal is also hunted in large numbers for its highly valued fur and tail. In 1996, the IUCN declared the Common pandas as threatened species. However, now they have been put in the list of endangered species. The exact population of the Common panda is not known, but it is estimated to be less than 2500.

Subspecies
Wildlife Sanctuaries
Red pandas can be found in the wildlife sanctuaries of Darjeeling, West Bengal and Sikkim, along with the Namdapha National Park of Arunachal Pradesh.