Asiatic Lions once used to roam around the area, stretching from northern Greece, across Southwest Asia, to central India. However, today, the natural habitat of the majestic animal has been reduced to the Gir forests of India only, making the Asiatic Lion almost synonymous with the Indian Lion. Known scientifically as Panthera Leo persica, the royal animal is depicted on the National Emblem of India, since it represents power, strength and sovereignty.

The males are orange-yellow to dark brown in color, while the females have a sandy or tawny color. Males also have a mane, which is usually dark in color, but is rarely seen to be of black color. This characteristic mane is absent in the females. The mane of an Asiatic Lion is also shorter than that of an African Lion. However, Indian Lions are much more bushy, with longer tufts of hair at the end of the tail as well as on the elbow joints, than their African cousins. 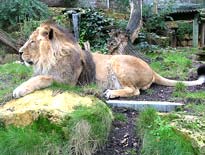 Indian Lions are the only Big Cats that are seen living in large groups, known as 'prides'. A typical pride comprises of around 15 members, which includes related lionesses, their cubs and a few males. The number of males in a pride is usually around three and one of them dominates the rest of the group, including the other males. In a pride, it is the lionesses that do all the work, right from taking care of the cubs to hunting. The males only make the first claim on the game hunted by the female.

The lionesses as well as the cubs eat only the leftovers. Male lions establish their pride's territorial boundaries by roaring and scent marking and fiercely defend it. All the members of the pride are closely attached with one another. Infact, majority of the lionesses remain with a particular pride throughout their life. However, a male is expelled from the pride the moment it is 3 years old. The few male lions that do not join any group become a major threat to the ones with a pride. Asiatic lions usually hunt in groups and are rarely seen stalking a prey in isolation.

Mating Behavior
Male lions attain the age of maturity around 5 years of age, while the lionesses become mature after becoming 4 years old. There is no particular mating season of the Indian Lions. They can mate anytime during the entire year. The gestation period lasts for 100 to 119 days, after which 3 to 4 cubs are born.

Diet
Indian Lions are carnivorous and depend upon hunting for food. Their prey mainly comprises of Deer, Antelope, Wild Boar and Wild Buffalo. At times, lions have also been observed attacking young hippopotamus and elephants.

Geographical Range
Asiatic Lions are highly endangered species and have become extinct from all the countries of the world, except the Indian subcontinent. In India also, the animal is found only in the Gir forests of Gujarat.

Current Status
The last census on the Asiatic Lions was carried out in the year 2006. It revealed the population of the species to be somewhere around 359, including over 50 lions kept in captivity.

Trivia
Asiatic lions form prides (groups), in which all the work, including hunting, is done by the lionesses. The only work that males do is to make the first claim on the prey hunted by the females. Apart from that, they just laze around and do nothing.