Indian black buck is also known by a number of other names like Kala Hiran, Sasin, Iralai Maan and Krishna Jinka. The scientific name of the black buck antelope is Antilope cervicapra and it natural habitat is the Indian subcontinent. Grass forms the staple diet of the blackbucks. However, they do eat pods, flowers and fruits as supplements. The average lifespan of the Indian kala hiran is twelve years and at the maximum, they live for sixteen years. Black bucks are hunted by dogs and wolves.

About the Indian Black Buck
The male black bucks grow to a height of 32 inches and weigh somewhere between 70 and 95 pounds. Their upper part is covered with either dark brown or black fur. Chest, belly, inner sides of the legs, muzzle and chin of the males have white fur. Even the eyes are surrounded with white rings. Male black bucks have ringed horns that are up to 28 inches in length and twirl with three to four turns. When the male blackbucks are born, they are light brown in color and as they reach the age of three, they turn dark brown or black. 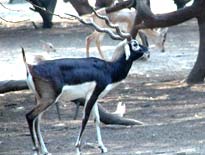 Female black bucks are much smaller than their male counterparts. They are beige or light brown in color and most of the female blackbucks do not even have horns. Even the few females that have horns lack the rings and spirals that characterize the male horns. Black bucks have very sharp eyesight, which, along with their great speed, forms their main defense against the predators. Female black buck antelopes have a gestation period of approximately five months. They generally give birth to two fawns every year, at a gap of six months.

The fawn of black buck spends the first two weeks after his birth in the grass, between nursing. Only after completing the first two weeks does the fawn join the group. Indian black bucks seldom live in isolation, they are found mainly in groups. The groups can be either those of the females, comprising of 15 to 20 members, mixed groups, bachelor groups or territorial males. The group of territorial males dominates all the other groups and inhabits the main grazing areas, along with the female groups.

Natural Habitat
Apart from India, black buck is found in parts of Pakistan and Nepal. Initially in India, the blackbucks were found almost everywhere except for the northeastern regions. However, today the population of black bucks has become limited to parts of Punjab, Rajasthan, Haryana and Gujarat, along with a few areas in the Central India. Blackbucks have open plains of India as their natural habitat and count amongst the fastest running animals on earth.

They live on open grasslands, dry thorn and scrublands. Black bucks were introduced in various parts of the world, including a number of ranches in Texas, in the United States of America. There are also free-ranging populations of Indian black bucks in Argentina (Pampas in southern Buenos Aires, Santa Fe and Entre Ríos provinces).

Current status of Black Bucks
Black bucks are included in the list of endangered species in India as well as Nepal. Two major factors that have contributed to their declining population are poaching and habitat destruction.

Threats
Apart from poaching and habitat destruction, the other threats to blackbucks include predation, overgrazing, diseases, inbreeding and hoards of visitors. The flesh and skin of black buck fetches quite a high price in the market, making the animal extremely vulnerable to hunting. The species is suffering from inbreeding and at the same time, there is the wide scale encroachment by the humans. Once found easily in the plains of North India, they have now being restricted to a few pockets in the country.

Trivia
Bollywood actor Salman Khan was convicted for killing a black buck, while shooting for the film 'Hum Saath Saath Hain'. However, the conviction was stayed some time later.