Indian subcontinent boasts of housing approximately 10 percent of the total snake species found in the world, adding up to somewhere around 200 species in number. From warm seas to semi-deserts, swamps, lakes and even the Himalayan glaciers, one can find snakes in almost all the habitats in India. The snakes of India range from Worm Snakes, about 10 cm in length, to the King Cobra, measuring upto 6 m. In the following lines, we have mentioned the four most popular species of Indian snakes:

Cobra
Cobra, scientifically known as Naja naja, is one of the poisonous snake species native to the Indian subcontinent. It grows to an average height of 1 m and has two circular ocelli patterns on the rear of its hood. These patterns seem to be connected by a curved line, giving the look of spectacles. 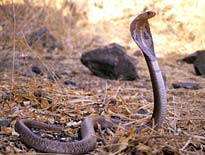 Indian King cobra snake belongs to the Ophiophagus Genus and is scientifically known as Ophiophagus Hannah. It is believed to be the largest poisonous terrestrial snake, measuring upto 5.7 m in length. However, the weight of a King cobra rarely exceeds 44 lb (20 kg).

Python
Python snake, also known as Ajgar, is one of the most massively built snakes of the Indian subcontinent. It belongs to the Boidae Family and is dependent on water to quite an extent. One of the unique features of the Rock pythons of India is that they can raise their body temperature above the ambient level, through muscular contractions.

Russells Viper
Russells Viper is known by a number of other names, like Daboia, Tic Polonga, etc. A highly poisonous snake of the Viperidae family, it is scientifically known as Vipera russelli. Indian Russell's viper is responsible for most of the snakebite deaths within its habitat.

Apart from the above-mentioned species, the following types of snakes are also commonly found in India: