Indian elephant, known with the scientific name of 'Elephas maximus indicus', is a subspecies of the Asian Elephant. It is mainly found in the Indian subcontinent, that to in the scrub forested areas. The other counties where Asian elephants are found include Bangladesh, Bhutan, Borneo, Cambodia, China, Laos, Malaysia, Myanmar, Nepal, Thailand, Sumatra, and Vietnam. Since Indian elephants are very huge and can trample all other creatures, they have no natural enemies. Even lions, hyenas, and tigers attack only the very young elephants and not adults.

Physical Traits
Asian elephants of the Indian subcontinent grow to a height of between 8 ft and 10 ft. Slightly smaller than the African elephant, they weigh as much as 7,000 to 11000 pounds. The feet of an Asian elephant are very large and broad, which enables it to balance its enormous weight quite easily. There are thick soles below the feet, which absorb shock and cushion legs, when the elephant walks and runs. Their length varies between 216 inches and 252 inches. 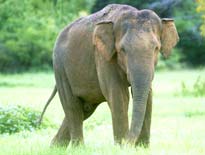 The huge and beautiful tusks of the Indian elephant only serve as the icing on the cake. These tusks are actually incisor teeth made up of ivory, which may grow upto 5 ft in length. The tusks are used by the elephants in digging for food, clearing debris, and carrying logs. The only other animal that has ivory tusks is the walrus.

Natural Habitat
Though Indian elephants are found everywhere, they prefer the scrub forests of India, with abundant food supply and shady areas. They do not stay at a particular place for more than a couple of days. One of the reasons for this is that their diet is very huge and they have to move to new areas to keep them supplied with food all the times. At times, you find Asian elephants roaming around in the Indian jungles. However, this is possible only if there is a there's a meadow or open space (with grass) around. They also prefer muddy areas in summers, where they can cool off during the hot daytime.

Diet
Asian Elephant is herbivorous and survives on bamboo, berries, mangoes, bananas, shrubs, tree foliage, wood, apples, wild rice and coconuts. Only half of the food eaten by elephants is used by their body. Therefore, it is necessary for them to eat 330 and 350 pounds of food every day. Their diet also consists of approximately 22 to 30 gallons of water per day.

Behavior
The groups (herds) of elephants are matriarchal i.e., a female elephant leads the herd. Males remain isolated and rarely form groups. They usually join the herd only when the mating season approaches. The members of a herd make use of a number of gestures and sounds while communicating with each other. Their sense of commitment towards the other members of the group is very strong. A female elephant protects her young one very fiercely. In her absence, this responsibility comes in the hands of the other females of the herd.

Mating Behavior
Male elephants fight to establish rights over a female herd. Indian elephants reach maturity by the age of twelve. The gestation period is between 630 and 660 days and the number of offspring is only one. The baby elephant is known as calf and usually weighs between 200 and 250 pounds.

Senses
Indian elephants are highly intelligent creatures and have acute senses of hearing and smell. They have large ears and can hear even those sounds that other animals do not. However, elephants have poor vision and their small eyes can see only upto 60 ft. Even though they are huge, elephants can easily balance their weight on two legs, especially while reaching the leaves of a tree. Even their sense of smell and sense of taste is very delicate.

National Parks
There is a significant population of elephants in the following national parks of India.