Indian subcontinent is a bird watcher's paradise. There are a large number of resident birds in India, some native and some introduced. However, all of them today beautifully reflect the rich natural life of the country. One can also find some of the rarest wild bird species in the subcontinent. Numerous bird sanctuaries have been set up in the country to provide the birds with a natural habitat and augment their population. In this section, we have provided information about the following Indian birds:

Bittern
Indian bittern is a bird belonging to the Ardeidae family of herons. Almost all the subspecies of Bitterns have a short neck and tend to be more secretive than the other members of the family. Indian Bittern birds form a monophyletic subfamily in the heron family of Botaurinae. 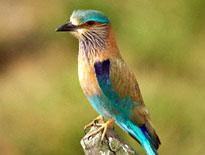 Greylag Goose
Greylag goose, Anser anser, is one of the Old World species of birds and was known in the pre-Linnean times as Wild Goose. It has ancestral relations with the domesticated geese of Europe and North America. Gray Lag Goose is a very frequent winter visitor to the north regions of the Indian subcontinent.

Great Indian Hornbill
Greater Indian Hornbill is considered to be the largest member of the hornbill family. Scientifically known as Buceros bicornis, it is usually found inhabiting the forests of Indian subcontinent, the Malay Peninsula and Sumatra, Indonesia. The average lifespan of the Great Pied Hornbill of India exceeds 35 years and may go upto 50 years in captivity.

Heron
Indian heron belongs is a member of the large wading bird family, known as Ardeidae. It is found mostly inhabiting the tropical and sub tropical areas. However, Indian herons can also be seen in temperate areas. There is one major characteristic that distinguishes herons from the other birds.

Peacock
Blue peacock is regarded as one of the most beautiful birds throughout the world. It is also the National Bird of the Indian subcontinent. Peacock is the name given to a male peafowl, while the female is known as Peahen. Scientifically known as Pavo cristatus (Linnaeus), the Peafowl of India is a swan-sized bird, with a long and slender neck.

Jungle Bush Quail
Jungle bush quail bird is one of the species of quails found in South Asia. The bird is usually seen in small coveys and is quite shy by nature. One can get a glimpse of the Jungle bush quails of India mainly when they burst out into flight from under the vegetation.

Stork
Indian stork is one of the 17 different species of storks found throughout the world. The only continent where storks are not found is that of Antarctica. The natural habitat of the storks comprises of Indian fields, savannas and marshes.