Nilgai, also known as Blue Bull, is one of the most commonly found wild animals of northern India as well as eastern Pakistan. Even though it is an antelope, it looks quite similar in appearance to an ox. Therefore, it has been given the name of Blue bull of India. The average lifespan of the Neelgai is 21 years.

Physical Traits
Indian Blue bull antelope stands tall, at a height of 1.2 to 1.5 m (4 to 5 feet). It grows to length of somewhere between 1.8 and 2 m and weighs around 120 to 240 kg. The tail of a Neelgai is 40 to 45 cm in length. The largest male blue bull antelope was seen in the state of Texas and it weighed over 272 kg. A baby Neelgai weighs between 13.6 and 15.9 kg. The strong body of the Blue bull of India is balanced on comparatively thin legs.

It has two small conical horns on the top of a long and narrow head. The horns are straight and at the same time, slightly forward tilted. Horns of male Nilgai are 21.6 to 25.4 cm in length. On the backside of the neck is an erectable mane, while the throat is adorned with a tubular-shaped "hair pennant". Female Neelgai is yellowish-brown in color and is shorter in height as compared to her male counterpart. As a male Nilgai attains maturity, its coat starts turning grayish-blue in color. There are white spots on the cheeks and white coloring on the edges of the lips. 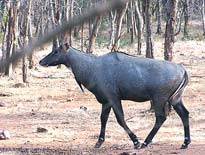 Nilgai antelope is a sociable creature, usually found in single-sex or mixed-sex herds. The membership of a herd may be anywhere between four and twenty. In winter, male blue bulls of northern India are known to form herds of 30 to 100 animals. Male Blue bulls, after they reach old age, may be found leading a solitary life. One can also come across individual male or female nilgais in cultivated or semi-urban areas.

Natural Habitat
Nilgai is a diurnal creature, found inhabiting Indian grasslands and woodlands. It avoids dense forest and has preference for plains and low hills with shrubs. Blue bulls are found in the northern plains of India, stretching on from the base of the Himalayas in the north, to the state of Karnataka in the South. Their range also covers the area from the Gir forest, all along the entire eastern length of Pakistan, across the border of Rajasthan in the West to the states of Assam and West Bengal in the East.

Mating Behavior
Nilgai attains maturity at the age of 18 months. The gestation period lasts for 8 months, after which, usually, twins are born. In some cases, the number of young ones may be one or three also.

Predators of Nilgai
The main predators of the blue bulls include tigers and lions. Leopards may attack calves, but are not capable of killing an adult Nilgai.

Status
Nilgai antelope has been listed in the 'Low Risk' category by the IUCN. The estimated population of Nilgai in India is approximately 100,000. The main threat to the Neelgai is from the destruction of its habitat to accommodate the ever-swelling human population.