Wild boar is considered to be the wild antecedent of the domestic pig of the Indian subcontinent. It belongs to the Suidae biological family, which also includes the Warthog and Bushpig of Africa, the Pygmy Hog of northern India and the Babirusa of Indonesia. Indian wild boars are also quite closely related to peccary or javelina of North, Central and South America.

Physical Traits
The thick coat of the wild boar of India is grayish-black in color and is covered with bristle-like hair. It can grow upto a length of 6 feet and may weigh as much as 440 lb (200 kg). The features of a wild boar are quite similar to that of a pig. It has a prominent ridge of hair, which match the spine. The tail is short and straight and the snout is quite narrow.

The most noticeable as well as most distinguishing feature of the wild boars comprise of a pair of extended canines. These canines grow both upward as well as outward. Indian wild boars possess an acute sense of smell. Even their eyesight and hearing power is fairly strong. 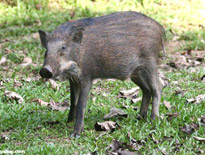 Wild boars can be found roaming around in groups, known as sounders. The number of sows, in a characteristic sounder, is two or three and rest of the members are the young ones. A typical sounder comprises of 20 animals on an average. In exceptional cases, the membership of a sounder may go upto 50 also. Adult males join a sounder only during the mating period and for the rest of the year they prefer to stay alone. Indian wild boars are basically nocturnal creatures, which forage from dusk to dawn. When surprised or attacked, they may get aggressive.

Diet
Wild boars eat anything and everything, including nuts, berries, carrion, roots, tubers, refuse, insects, small reptiles, etc. Young deer and lambs may also form a part of their diet.

Habitat
Wild boar is found inhabiting the woodlands of Central Europe, Mediterranean Region (including North Africa's Atlas Mountains) and most of Asia (including India).

Mating Behavior
There is no fixed mating period of the wild boars of India. However, whenever it takes place, it results in a formal contest between the males to decide the dominant male. The winner gets to mate with the female boar. The maturity period is one year and gestation period lasts for four months. A female wild boar usually gives birth in the spring season and the litter normally consists of 4 to 6 cubs.

Status
The population of Indian wild boars is declining at a fast pace. The reasons for this are large scale poaching as well as habitat destruction. At some point of time, Indian sub-continent consisted of 6-7 species of wild boar. However, today only one of them is left.