Indian Gazelle, also known as Chinkara, is a species of gazelle found in South Asia. It belongs to the Bovidae family and is scientifically known as Gazella bennettii. The life expectancy of a Chinkara is between 12 to 15 years, less than that of many other deer species. Male gazelles are believed to be territorial in nature and are not prone to wandering for large distances. Gazelles come across as very nervous animals and always seem to be on alert. It is believed that the dwindling population of Chinkaras is leading to a decline in the population of Cheetah, their main predators, in India.

Physical Traits
Standing at a height of 65 cm, Indian gazelle comes across as smaller than many other species of deer. Its coat is covered with smooth and glossy fur, which is reddish-brown in color. The belly of the gazelles is white and they weigh around 23-25 kg. There are dark chestnut stripes on the sides of the face that stretch on from the corner of the eye to the muzzle. The muzzle is also bordered by white stripes. Chinkara also has horns, which have an average length of 30 cm. 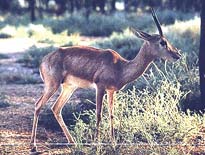 Chinkara is a very shy animal and tries to stay as far from human settlement as possible. It is mainly seen roaming alone in the wild. However, at times, one can see Indian gazelles in small groups, comprising of upto 4 animals. One of the unique characteristics of the Indian gazelle is that it can survive without water for days at a stretch. The need for fluids is met through plants and dewdrops.

Natural Habitat
The natural habitat of the gazelle comprises of the grasslands and desert areas of India, Iran and Pakistan.

Diet
Indian gazelles depend on vegetation as their diet and prefer grass and fruits. During winter season, females and sub-adults take a diet that is rich in protein and has less of tannins.

Mating Behavior
There is no fixed breeding season for the gazelles of India. However, they usually mate somewhere around autumn and spring. The gestation period lasts for five and a half months.

Status
Indian gazelle has been classified as a highly vulnerable species and founds a mention in the endangered species list. The main reason for their declining population is the fact that the animals are hunted for game.

National Parks
Gazelles can be seen mainly in the following national parks of India:
Trivia