Indian Weddings Home Remedies Ayurveda Vastu Yoga Literature
This article is intended to provide you information on Indian reptiles. Know about each and every reptile of India.
Home : Wildlife in India : Indian Reptiles

The reptile species is well represented in the country of India. Infact, the subcontinent is home to as many as 447 species of reptiles (census 1994). One can find crocodile inhabiting the rivers, swamps and lakes of India. Then, there is its cousin, known as gharial, which is found in a number of Indian rivers, including Ganges and Brahmaputra. Also included in the list of Indian reptiles are turtles, tortoise and chameleons. The reptiles of India constitute 6.2 percent of the total population of reptiles in India. Out of these, 26 species have been listed as threatened in the IUCN Red List of Threatened Animals (IUCN 2006). In the following lines, we have provided more information about the Indian reptiles:

Chameleon
There is only one species of chameleons found in the Indian subcontinent, scientifically known as Chamaeleo zeylanicus. The term 'chameleon' is a combination of two Greek words, 'Chamai', meaning 'on the ground/earth' and Leon, meaning 'lion'. Thus, 'chameleon' means 'earth lion'. 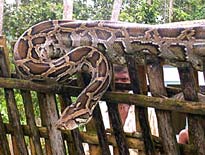 Gharial crocodile counts amongst the largest crocodile species in the world. It is also one of two surviving members of the Gavialidae family. Ghavial Crocodiles of India have an elongated and narrow snout, which becomes thinner with age. There is a bulbous growth on the tip of an adult male's snout, known as 'ghara'.

Mugger Crocodile
Mugger crocodile belongs to the Crocodylidae Family and is scientifically known as Crocodylus palustris. Adult Mugger crocodiles of India are bright olive in color, while the young ones are on the paler side. The entire body is spotted with black and scaled. Outer toes as well as fingers are webbed at the base.

Tortoise
Indian tortoise belongs to the Testudines Order and, like turtles, has a shell as its protective covering. It has both an endoskeleton as well as an exoskeleton. The length of a tortoise varies between a few centimeters and two meters. Infact, the growth of a tortoise depends upon the amount of food and water it eats.

Turtle
Indian turtle, along with tortoise and terrapin, belongs to the Testudines order of reptiles and the Chelonia crown group. The body of a turtle is covered with special bony or cartilaginous shell, which is developed from its ribs. One of the oldest reptile groups, the turtle of India was in existence even before lizards and snakes.

Water Monitor
Indian Water Monitor lizard is one of the largest as well as the heaviest species of lizards, second only to the Komodo Monitors. The average length of a water monitor is around 4 feet. Its entire upper body has round and protruding scales and the abdomen is covered with smooth scales.