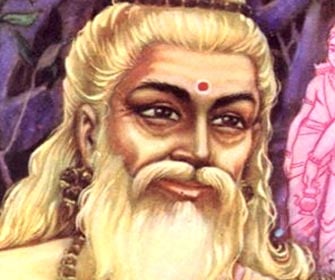 About Vishwamitra
Rishi Vishwamitra is considered to be one of the most revered rishis (sages) of the ancient India. As per the holy Puranas, there have been only 24 Rishis in India who have the Gayatri Mantra. It is believed that Sage Vishwamitra is the first saint of the 24 saints, and Sage Yajnavalkya the last. He also claims the distinction of being the author of the majority portion of the Mandala 3 of the Rig-Veda. Read on to explore the biography of Sage Vishwamitra further…

Early Life
Rishi Vishwamitra was born as 'Kaushika' and was the great-grandson of a great sage king, known as Kusha. He was born to Gadhi, one of the four sons of Kusha. Like every other prince, Kaushika also succeeded his father to the throne of his kingdom.

Meeting Sage Vasishta
While on a tour of his kingdom, Kaushika came across the hermitage of the great sage, Vasishta, along with his army. The peace and the solitude surrounding the hermitage impressed him deeply and he entered inside. There, he and his army were well received and served a splendid feast. Surprised at the welcome received by him, Kaushika asked sage Vasishta that how he managed to feed such a large army.

The sage replied that the food was provided to him by his calf, Nandini, gifted to him by Lord Indra himself. Kaushika offered the sage a large amount of wealth in return of the calf. However, the sage declined the offer. Enraged at the refusal of sage Vasishta, he ordered his army to forcefully take the calf to his kingdom. The sage used his yogic powers to bring forth a huge militia of fierce warriors, who defeated the army of Kaushika. Kaushika was captured and brought before the sage, who pardoned him.

Renunciation
The above mentioned incident deeply affected Kaushika and made him realize that power of penance was greater than that of physical strength. He relinquished his throne and began his journey to become a sage, greater than even Vasishta. After undergoing intense meditation and severe asceticism, he was bestowed with the title of Brahmarishi by Lord Brahma himself. He was given the name of 'Vishwamitra' (friend of all).

Legends surrounding Vishwamitra
It is said that Sage Vishwamitra created a parallel heaven, known as Trishanku Swarga, for King Trishanku. It is also believed that in the great epic Ramayana, Vishvamitra was born as Lakshmana, the brother of Lord Rama. He gave his brothers the knowledge of the Devastras (celestial weaponry), trained them in advanced religion and taught them how to kill powerful demons.