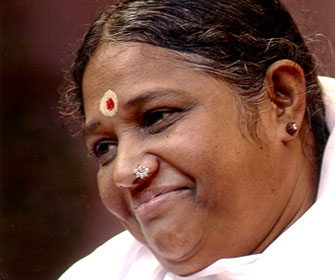 About Mata Amritanandamayi
Mata Amritanandamayi Devi is one of the most loved and most respected spiritual leaders in India. Fondly known as Amma, she has only one aim in life, which is to provide people with her supreme guidance and lead them on a path of sadhana (meditation) and service of the mankind. She is also called the 'Hugging Saint', since she hugs each and every individual who comes to attend her discourses. Read on to explore the biography of Mata Amritanandmayi further…

Amritanandamayi Devi Life History
Amritanandamayi Devi was born as Sudhamani in September 1953, in a small fishing village of Parayakadavu, Kerala. Unlike other newborn infants, Sudhamani did not come into this world crying. Even at that time, she was smiling and there was a serene glow on her face. Right from her childhood, Mata Amritanandmayi was deeply inclined towards spiritual practices. She could be frequently seen engrossed in deep meditation, totally unaware of her surroundings.

Sudhamani was always deeply attached to her fellow human beings. She was quit affected by the suffering of others and went out of her way to alleviate their pain. Today, the little girl has grown-up to become Mata Amritanandmayi Devi, one of the most revered spiritual leaders of her time. Since the past 35 years, she has been working relentlessly towards easing the sufferings in this world.

Mata Amritanandamayi Mission
Her sole mission in life is to "love and serve one and all". She is totally devoted to the well being of the mankind. Her soothing words, her calm voice, and her calm and composed personality easily makes one forget all the miseries in life.

Mata Amritanandmayi Ashram
Mata Amritanandmayi Ashram is situated in Amritapuri, amidst the backwaters of Kerala. For all those people who have become tired with the pain and suffering in life, the ashram serves as a welcome retreat. The peaceful and serene ambience of the ashram, combined with the simplicity of Amma's discourses, provides a welcome relief from the ill will so widespread in this world.

Recognitions to Mata Amritanandamayi Devi
In 1993, Mata Amritanandamayi was elected as one of the presidents of the assembly of global religions, which was held in Chicago. At the same time, Hinduism Today, an international journal on Indian culture, honored her by giving her the 'Hindu Renaissance Award'. She even spoke at the Interfaith Celebrations in New York, held in commemoration of the 50th anniversary of the United Nations. In 2002, she was invited as the central speaker at The Global Peace Initiative of Women Religious and Spiritual Leaders, held in Geneva. In the same year, she was also presented with "Gandhi-King Award for Non-Violence", by The World Movement for Nonviolence.