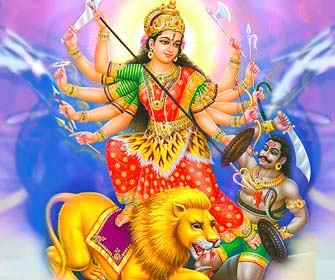 As per the Hindu religion, the Supreme Being contains both masculine and feminine traits. The female part is as important as the male part. One has to consider the feminine aspect of the divine, in order to know the ultimate truth. It is believed that all goddesses of the Hindu pantheon are special forms of the divine mother- Shakti. To recognize the feminine aspect, it is necessary to restore wholeness, completeness and universality.

There are many goddesses and local deities in the Hindu mythology. Here we will discuss some of the popular Hindu goddesses (forms of Shakti).

Goddess Durga (Mother)
Durga symbolizes the power of the Supreme Being that maintains moral order and righteousness in the universe. Worship of the goddess Shakti is very popular among the Hindu people. Durga stands for the unified symbol of all divine forces (Shaktis).

Goddess Lakshmi
Lakshmi is the auspicious goddess of wealth and fortune, whether it is material or spiritual. The word ''Lakshmi'' has been derived from the Sanskrit word Lakshay, meaning "aim" or ''goal''. Goddess Lakshmi suggests the aim of life, which includes all worldly and spiritual success.

Goddess Saraswati
Saraswati Devi is the Goddess of arts, music, knowledge, and wisdom. Saraswati is considered as the divine consort of Lord Brahma, the Creator of the universe in the Hindu Religion.

Goddess Kali
Kali is one of the many forms of Shakti. Maha Kaali is the fiercest of all goddesses of Hinduism. The word Kali has its roots in the Sanskrit word "Kaal" which means time. And nothing escapes from time. Goddess Kali is sometimes referred as the goddess of death.

Goddess Parvati
Parvati is a well known goddess in the Hindu mythology. Goddess Parvati is the divine consort of Lord Shiva, the trinity god. Parvati is also considered as a representation of Shakti or Durga, but the gentle aspect of that goddess not the fierce one.

Ganga
The River Goddess Ganga / Ganges is considered as the most sacred river of the Hindu Mythology. River Ganges is very much popular in India and is worshipped as a goddess. Ganga is the most revered river in the world.

Radha
Goddess Radha is a well-known personality in Hindu Mythology. She is also known as Srimati Radharani in the northern part of India. Radha is usually depicted with her paramour Krishna.