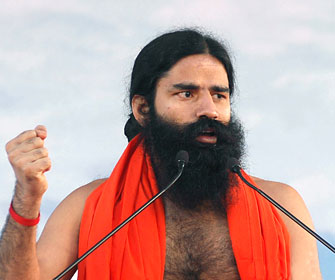 About Ramdev Baba
Baba Ramdev is a renowned Yoga teacher. Through the medium of television, he has taken the art of yoga to each and every household far and wide. He is the host of a program named 'Divya Yog' that airs on Aastha TV everyday, at 5 am in the morning. People from different parts of the country watch this program and have started doing yoga from the comforts of their home.

Early Life
Swami Ramdev was born as Ramkishan Yadav in the Mahendragarh district of Haryana. After studying at school till the eight standard, he joined a yogic monastery (gurukul) in Khanpur village. There, he started learning the techniques of Yoga, along with the Sanskrit language.

Renunciation
After completing his period of study at the Gurukul, Baba Ram Dev renounced the world and entered into Sanyas (monastic living). It was then that he assumed the name of Ramdev. He went to Jind district and joined the Kalva gurukul. There, he started teaching Yoga to the villagers across Haryana. It is believed that some time later, he traveled to the Himalayas, spending a number of years there. Thereafter, he went to Haridwar and till date, the city serves as his base.

Initiation into Ascetic Order
Swami Ramdev was initiated into the ascetic order by Swami Shankerdevji Maharaj. After his initiation, he joined the order of swamis and started studying the ancient Indian scriptures. At the same time, he also practiced intense self-discipline and meditation.

Divya Yoga Mandir Trust
As a promotional vehicle for Yoga, Baba Ram Dev established the Divya Yoga Mandir Trust in 1995. In this project, he was accompanied by Acharya Karamveer and Acharya Balkrishna. The headquarters of the trust are at the Kripalu Bagh Ashram of Haridwar. Baba Ramdev teaches yoga mainly at this ashram.