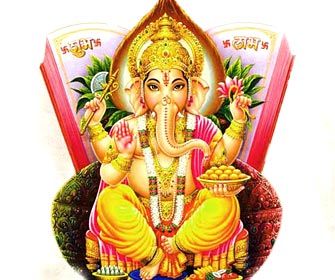 Lord Ganesha is the god of beginnings, knowledge, wisdom, intellect and eradicator of obstacles. Lord Ganesha is the child of lord Shiva and goddess Parvati. He is the elder brother of lord Kartikay (Skanda/ Murugana). Ganesha is the most extensively worshipped god in Hindu way of life. Each sort of worship whether tantric or spiritual starts with the prayers of Ganesha in Hinduism as he is known as the eradicator of obstacles (Vighneshawar). He is worshipped in the starting of any propitious event for blessings and hassle-free work. Lord Ganesha is invoked as the "Patron of Letters" at the beginning of any writing.

Ganesha Image
Ganesha figures show extensive variation with dissimilar patterns changing over ages. A different mixture of his elephant-like head, a pot belly and a small mouse makes him different from all other Hindu gods in appearance. Many a times, he is represented standing, sitting, dancing, like a warrior in heroic action against demons, playing with his family as a boy, sitting down, or in a significant range of contemporary situations when depicted in festival displays.

Ganesha has four hands, holding an axe in the right upper arm, while the left upper arm holds a noose, signs of his ability to cut through obstacles or to create them as required. In the third one he carries laddoo (a sweet delicacy) and the fourth hand's palm is always there to bless people. His vahana is a tiny mouse which represents the dominated demon of pride and impertinence.


Ganesha Chalisa
Shri Ganesh Chalisa is a "forty verse" prayer. Verses are recited or chanted by groups. The acts and deeds of Lord Ganesha are recalled in these verses to aid the devotee to meditate on virtuous and noble qualities.

Legends of Ganesha
There are many stories of Lord Ganesha regarding his origin and various others which tell about the nature and traits of his character. Ganesha is known as the god of wisdom, literature and worldly success. He is known as the eldest son of Lord Shiva and Parvati (Uma), younger brother being Kartikay.

Ganesha Mantra
Ganesha Mantras are known as Siddhi Mantra (the one with perfection). Each and every mantra is full of energy and power of Lord Ganesha. It is believed that mantras of Ganesha, when chanted with genuine devotion, give positive results. These mantras ward off all trials and troubles gracing the devotee with every success.