Lord Vishnu, one of the Hindu Trinities, is among the most popular gods of the Hindu Religion as the preserver.
Home : Spirituality : Hindu God : Vishnu 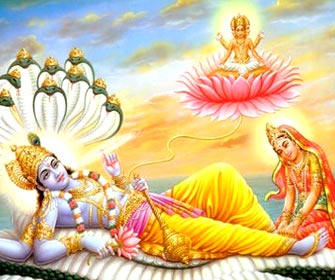 Lord Vishnu is considered as the chief god in Hindu religion and Indian mythology. Vishnu, the preserver, forms the part of the trinity while the other two being Brahma and Shiva, respectively, as the creator and destroyer of the universe. It is believed that Vishnu is an eternal and universal spirit associated with the primeval waters that pervaded before the creation of the universe.

Vishnu - The Name
Lord Vishnu is known by numerous names and a thousand names are given in the book '' Vishnu Sahasranama''. The name Vishnu has its roots in a Sanskrit word 'Vish ', which means to pervade. God Vishnu is all pervading but known more by the avatars (incarnation) he took on the earth.

Vishnu - the Preserver
To understand the concept of Vishnu being the preserver of the world, one has to understand the two beliefs of Hinduism. The first is that men attain salvation by faithfully following predetermined paths of duty. The Second is that powers of good and evil (gods and demons) are in regular controversy to rule over the world. It is believed that whenever evil prevails over good in order to win, Vishnu comes down to earth in some mortal form to save righteousness. As per the Puranas, Vishnu is not allowed to interfere in the situations directly. So, he takes different avatar and act in manners that will re-establish proper balance between good and evil.

Vishnu - The Image
According to numerous Purana, Vishnu is the ultimate omnipresent reality. Still, he is depicted as a four-armed male-form indicating his all-powerful and all-pervasive nature. The skin color is new-cloud-like-blue which indicates his all-pervasive nature, blue being the color of the infinite sky as well as the infinite ocean on which he resides. Vishnu has the mark of sage Bhrigu's feet and the srivatsa mark, symbolizing his consort Lakshmi, on his chest. A crown decorates his head symbolizing his supreme authority. He rests on Ananta, the immortal and infinite snake.

Avatars of Vishnu
Lord Vishnu is prominent as the Preserver of the universe. Vishnu's restoring, shielding and conserving powers have been apparent in the world in a sequence of ten mortal incarnations known as Avatars. The avatars appear in order to balance the effect of good and evil upon the earth. It is believed that nine avatars have already descended, three in non human form, one in hybrid form and five in human form.