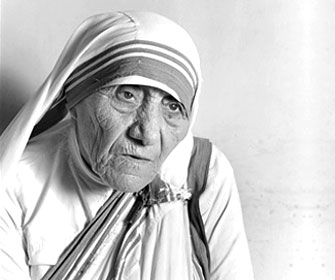 About Mother Teresa
Saint Mother Teresa is perhaps the greatest human being who has ever lived in this world. She was beatified by Pope John Paul II in October 2003. She had only one aim in life, to serve the poor, the destitute, the needy and all those who were dejected by the society. Mother Theresa founded an institution, known as 'The Missionary of Charity' to help her in fulfilling this aim. Read on this biography to know more about Saint Mother Teresa.

Early Life
As per her life history, Mother Teressa was born as Agnes Gonxha Bojaxhiu on 26th August 1910. At the young age of twelve, Agnes started to feel disinterest in the worldly affairs. By the age of eighteen, she was determined to become a nun and left her home to join the Convent of Our Lady of Loreto in Dublin. She undertook the name Teresa in the year 1931 and at the same time, she took her vows.

Coming to Calcutta (Kolkata)
Mother Theresa came to Calcutta (now Kolkata) in the year 1937 and joined St. Mary's High School. It was here that she fully comprehended her true calling in life, which was to serve the needy and rejected people of the society.

Founding Missionaries of Charity
To help her in attaining her goal in life, Mother Theresa wanted to start a diocesan congregation. However, for this she required the permission of the Vatican. The permission came in 1950 and thus was born 'The Missionary of Charity'. In 1965, Mother Teresa was awarded a Decree of Praise by Pope Paul VI and with this, she received the permission to expand her order to other countries. Toda, the Missionaries of Charity boasts of 4,000 nuns and branches in 133 countries of the world.