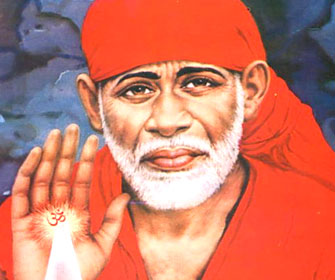 About Sai Baba
Sri Shirdi Sai Baba is considered to be the epitome of spiritual enlightenment and religious harmony. One of the greatest saints ever born in India, He is believed to be a manifestation of God. His main aim in life was to make people realize the eternal truth "Sabka Malik Ek" (One God governs all). He always preached people to follow the path of Shraddha (devotion) and Saburi (patience). Read this biography further to know about the life history of Shri Shirdi Sai Baba.

His Life
No authentic information is available about the birth and the early life of Sri Sai Baba. It is believed that He was born to Hindu parents, but raised by a Muslim couple. The only records that are available are from the time He made His appearance in Shirdi, a small town near Nashik city of Maharashtra. It is said that He was first seen in Shirdi, sitting in a meditative posture under a Neem tree. The radiance on the face of the young boy, along with the intense meditation He was undergoing, attracted the villagers towards him.

It is said that Sri Sai Baba left Shirdi after a period of three years and came back when He was twenty years old, accompanying a marriage party. In Shirdi, He mostly stayed in an abandoned mosque, situated in the outskirts of the village. Later, the mosque came to be known as 'Dwarikamai'. With time, Sai Baba came to be known in places far away from Shirdi. This time, Baba remained in Shirdi for a period of sixty years. It was in Shirdi only that He attained Maha Samadhi (salvation) in 1918.

Mission of Shri Sai Baba
The main aim of Sri Shirdi Sai Baba was to spread the feeling of unity and brotherhood throughout the world. He preached that there is only one God, who is the master of all the human beings. God loves each and every person, irrespective of his/her vices or virtues. Similarly, we should also love each other, irrespective of the religion, caste, creed, etc.

Sai Baba Incarnations
Sri Sathya Sai Baba of Puttaparthi is considered to be an incarnation of Shirdi Sai Baba. It is belived that Sai Baba will reincarnate himself again in the world for the third and final time, in the form of Prema Sai Baba.