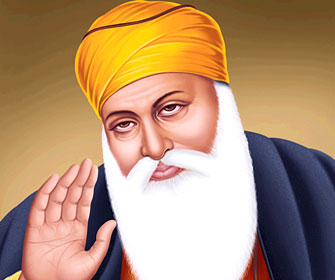 About Guru Nanak Dev
Guru Nanak Devji was the founder of one of the largest religions of the world, Sikhism. He was also the first amongst the ten Gurus of the Sikhs. He believed that there is only one God and we can reach him through any religion, be it Hinduism, Sikhism, Islam, etc. he was also a great poet as well as an excellent musician and could easily convince anybody through the power of his words. In this article, we have provided you with the life story of Guru Nanak Devji in brief…

Early Life
As per his biography, Sri Guru Nanak Dev was born in Nankana Sahab city of Punjab (now in Pakistan), in the year 1469. His parents belonged to the Hindu Khatri clan. It is said that at the age of five years, Guru Nanak Dev started discussing spirituality. He left school at a very tender age and initiated his own teacher as his first disciple. Seeing his inclination towards spirituality and asceticism, his family got him married at the age of fourteen. However, this did not prevent him from following the path of spirituality.

Life of Wanderer
With time, Guru Nanak Devji started assuming more and more spiritual powers. Later, he left his home, along with his Muslim friend, and led the life of a wanderer for almost twelve years. Throughout this period, he met a number of religious teachers as well Indian philosophers. Read on to know more about Guru Nanak Dev life history…

Four Major Journeys
Even though Guru Nanak spent 12 years traveling around and visited many places, his following four journeys are the most popular…
Receiving Enlightenment
After leading the life of a wanderer for almost 12 years, Guru Nanak Devji left for the Himalayas. As per the record, it was there that he had the first direct experience of God. Thereafter, he settled in Kartarpur as 'a Guru with a family' and started giving religious discourses. He spent the last 15 years of his life in Kartarpur only and started the practice of 'Langar' (community kitchen) for the needy and deprived. Sri Guru Nanak Dev left the world and took his place in heaven in the year 1539.