Hanuman is considered as the incarnation of Lord Shiva, the trinity god. Shri Hanuman is a great devotee of Lord Rama.
Home : Spirituality : Hindu God : Hanuman 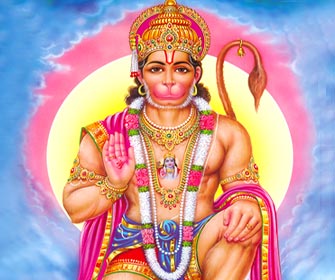 Hanuman is considered to be an avatar (incarnation) of Lord Shiva. Shri Hanuman, a great disciple of Sri Rama, is the symbol of devotion and dedication. Lord Hanumana is a provider of courage, hope, knowledge, intellect and devotion. Hanuman is in the form of Vaanar (monkey). He is usually pictured as a strong monkey holding a gada (mace) which is a sign of bravery and having a picture of Lord Rama on his chest which is a sign of his devotion to Lord Rama.

Birth of Hanuman
Hanuman was born in the Treta Yuga, to Anjana, a female vanara and Kesari, a strong vanara .This birth was planned by the Supreme lord with a perfect idea in the mind. The combination of Vanara and the celestial gave Hanuman strength, divinity and quick wits - his main characteristics. Being Anjana's son, Hanuman is also called Anjaneya, which plainly means "arising from Anjana".

Hanuman- The Brahmachaari
Hanuman remained a Brahmachaari throughout his life, an unmarried, celibate god. He is especially popular with body-builders, who believe that like him, one need to be celibate in order to have a strong body. Hanuman always treated women in the form of Mother and Sister. There are many incidences in the great epic Ramayana where this fact is proved.

Lord Hanuman - A Great Disciple
Hanuman has intense love for his Lord Rama which can be considered from this instance. Once Hanuman was asked by Sri Rama, "How do you consider me?". Hanuman said: "Oh Lord, while I identify myself with my body, I am Thy servant. When I consider myself an individual soul, I am Thy part. But when I look upon myself as the spirit, I am one with Thee. This is my firm conviction."

During Chaitra (in between March-April), Hanuman Jayanti is celebrated to honor the birth of Hanuman, the monkey god widely acclaimed throughout India.

Hanuman Aarti
Hanuman Aarti completes the worship or prayers made to the God. It is believed that aarti provides a completion to the puja .This aarti of Shri Hanuman is also known Bajrangbali Aarti.

Shri Hanuman Chalisa
Shri Hanuman Chalisa is a prayer of "forty verses". Verses are recited or chanted by groups. The acts and deeds of Lord Hanuman are recalled in these verses to aid the devotee to meditate on virtuous and noble qualities.

Names of Hanuman
Lord Hanuman is the epitome of devotion and dedication towards his Lord Rama. Shri Hanuman is considered as the avatar or incarnation of Lord Shiva. Hanuman is also known as the Monkey God, who represents strength, valor, wisdom, intellect and sincere devotion. Hanuman is a powerful God who observed celibacy throughout his life.

Legends of Hanuman
Hanuman ji is considered as the incarnation of Lord Shiva. Shri Hanuman is one of the popular gods of the Hindu religion and is worshipped all over the world. Life of Hanuman is a legend in itself, for his immeasurable love towards his Prabhu Ram.