Ganga, the River Goddess is the only living goddess of Hindu Mythology. Ganga/ Ganges is the sacred river of India.
Home : Spirituality : Hindu Goddesses : Ganga : Ganga 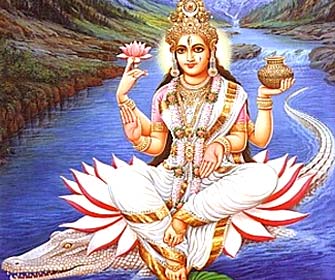 Goddess Ganga
Ganga / Ganges is considered as the most sacred river of the Hindu Mythology. River Ganges is very much popular in India and is worshipped as a goddess. Ganga is the most revered river in the world. River Ganga is unique in itself with its mind blowing length and width. Many other rivers of the world exceed Ganga on these aspects but none of them can match the reverence and affection that is shown to Ganga by the people of India and the world.

According to the Puranas (Holy Scriptures of Hindus), the sight, the name and the touch of Ganga takes away all sins. As per Hindu thoughts, bathing in the river on special occasions causes remission of sins and facilitates the attainment of salvation. It is considered that Ganga bestows blessings of the highest order. People come from far and near to immerse the ashes of their kin in the waters of Ganga, with a belief that the ashes would go to heaven.

Gangajal - The Water of Ganga
Gangajal, the water of Ganga, is regarded as the most pure and sacred water on this earth. Ganga water is used in various religious ceremonies of Hindus. Even Science has proved that Ganga water is pure and bacteria free. Gangajal can be kept for years without any problem.

River Ganges / Ganga
According to Hindu Mythology, Ganga is considered as the celestial creature of heaven and it descends on the earth to rinse away the sins of the mankind. On the earth, Ganges or Ganga originates from the Gaumukha, Gangotri glacier in the central Himalayas, located in Uttarakhand, India. This is acknowledged as one of the holy pilgrimages of India.

The River flows through a wide area covering several sacred places of Hindus like Haridwar, Allahabad and Varanasi. The Ganga and its tributaries drain a large and fertile basin with an area of about one million square kilometers that supports one of the world's highest density human populations. After a long journey of 2,510 kms, Ganga drains into the Bay of Bengal through its vast delta in the Sundarbans.

Representation of River Goddess Ganga
Ganga represents the innermost pristine coolness, piety and purity. River Ganga enriches the spiritual lives of millions and millions of Indians for whom the river is divine. Holy River Ganga personifies Goddess Ganga who descends to the earth to rinse away the sins of the mankind. The river Ganga itself embodies all the characteristics India is known for: mythical, serene, all pervading and assimilative.

Ganga Legend
Ganga, the River Goddess is the only living goddess in the Hindu pantheon. There are numerous stories regarding the birth and origin of this goddess. According to the beliefs, Ganga descends on the earth to rinse away the sins of the mankind. Ganga is the sacred river and has been referred to in the various ancient texts of Hindus.