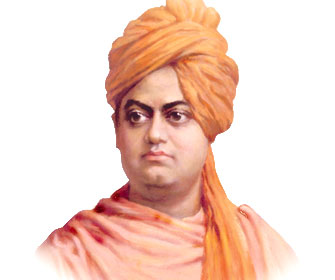 Early Life
Swami Vivekananda was born as Narendranath Dutta in Calcutta (now Kolkata), in the year 1863. Even as a child, Narendra showed a high level of intelligence and a deep inclination towards meditation. He joined Presidency College of Calcutta in 1879 for one year and then entered Scottish Church College to study philosophy. By this time, Narendra started questioning God and His presence. He also became a part of the Brahmo Samaj, a religious movement. Unsatisfied with only congregational prayers and devotional songs, he started looking elsewhere to find answers to his questions.

Meeting Ramakrishna and Renunciation
His search led Narendra towards Ramakrishna, whom he met in November 1881. After testing Ramakrishna to his maximum limit, Narendra accepted him wholeheartedly as his Guru. He remained with Ramakrishna for a period of five years. After the death of his Guru, Narendra took his vows as a monk, renounced the world and became Swami Vivekananda. In July 1890, Narendra started his journey as a wanderer, roaming around the country promoting the teachings of his Guru.