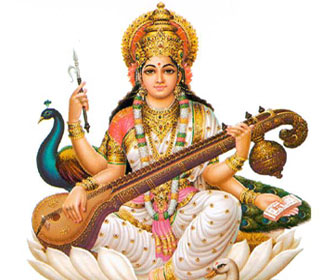 Saraswati - the Consort of Brahma
Lord Brahma is known for creating the universe. Since knowledge is required for creation, Maa Saraswati signifies the creative power of Brahma. An apt creation requires sound knowledge. The creation of Lord Brahma became fruitful with the knowledge provided by Goddess Saraswati.

Maa Saraswati - The Image
Goddess Saraswati is usually depicted as a beautiful woman with yellow skin dressed in a pure white saree. Saraswati is portrayed sitting on a white lotus with veena (a musical instrument) in her hands. The book in her hand signifies the eternal and universal knowledge as well her perfection of the scriptures. Lotus symbolizes the supreme reality and it suggests that the goddess herself is rooted in the supreme reality.

The color white represents purity and her rejection of everything that is base and materialistic. The Swan represents the discrimination between the evil and the good, the eternal and the transitory. The four arms of the goddess suggest the four aspects of human personality i.e. mind, intellect, vigilance, and ego. The pearl string represents the power of spirituality. The peacock standing near Maa Saraswati represents arrogance and pride over its beauty. The Goddess teaches that physical appearance could be deceptive, by not taking peacock as the vehicle. Goddess Saraswati suggests that one should be wise regarding the eternal truth.

Saraswati - Bestower of Knowledge
Musical instruments, books, speech, knowledge, intellect are regarded as symbols of Saraswati. Saraswati is believed to be the provider of knowledge that dispels ignorance and unhappiness. Saraswati is worshipped by seekers of knowledge especially students, scholars and scientists.