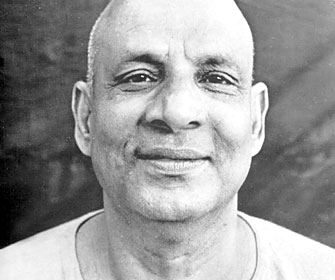 About Swami Sivananda
Swami Sivananda was a responsible for promoting the philosophy of Yoga and Vedanta amongst the people of India as well as the world. He was also the founder of the Divine Life Society, apart from being the author of more than 200 books, on Yoga, Vedanta, etc. read on this biography to know more about Swami Sivananda and his life history.

His Early Life
Swami Sivananda was born as Kuppuswamy on 8th September 1887, in Pattamadai, Tamil Nadu. The third son of his parents, Kuppuswamy displayed great intelligence right from his childhood. While completing his medical studied from Tanjore, he started a medical journal called Ambrosia. After graduating in medicine, he started practicing in Malaysia for a prod of ten years. He always used to treat the poor people free of cost.

As time passed, he started feeling that medicine cured a person only at a superficial level, without even touching their soul. People are affected by problems only at a physical level, but also at the spiritual level. His spiritual quest made him leave Malaysia in 1923 and come back to India.

Meeting Swami Vishwananda Saraswati and Initiation
After coming to India, Kuppuswamy started visiting various pilgrimage destinations. He met Swami Vishwananda Saraswati in Rishikesh in 1924 and took him as his Guru. Vishwananda initiated him into sanyas (asceticism) and gave the name of Swami Sivananda. However, Swami Vishnudevananda, the Mahant of Sri Kailas Ashram, performed the rest of the Viraja Homa ceremonies later. In 1927, Sivananda started a charitable dispensary at Lakshmanjula, where he treated pilgrims, holy men and the poor. Swami Sivananda left the world on 14 July 1963, on the bank of Ganges, in Shivanandanagar.