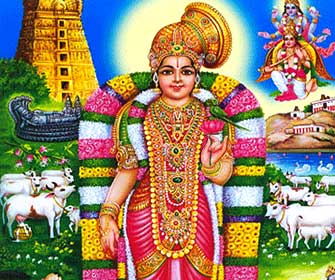 About Andal
Andal was a 10th century Tamil poet who is revered as a saint in the southern parts of India. Infact, she is considered as one of the twelve Alvars (saints) and the only woman Alvar (saint) of Vaishnavism (a cult devoted to Lord Vishnu). She is also believed to be an incarnation of Sri Bhumi Devi, the Divine Consort of Sriman Narayana (a manifestation of Lord Vishnu). Andal Thiruppavai, the compilation of devotional poems sung by her, is still recited by devotees during the month of Margazhi.

Early Life
The life history of Andal tells us that a person named Vishnucitta found her, as a little baby girl, under a Tulsi plant in the temple garden of Srivilliputtur. He gave her the name of Goda, meaning 'the gift of Earth'. Vishnucitta brought her up in an atmosphere of love and devotion towards the Lord. The intensity of her love and dedication towards the Lord grew so much that she decide to marry Sri Ranganatha, a form of Lord Vishnu.

Unusual Offering
As per Andal biography, as she grew, her determination to marry Lord Ranganatha also increased. She also started making a unique offering to the Lord. She used to wear a flower garland first herself and then offer it to God. As an explanation, she said that first wanted to see whether the garland looked good or not by wearing it herself and looking in the mirror. Only after she was convinced that the garland looked nice, did she offer it to God.

One day, her father saw her doing this and admonished her from repeating this act. Goda made a new garland for the Lord. It is said that the same night, Vishnucitta received a vision from the Lord, who told him that He heartily accepted Goda's offerings. From that day onwards, Goda came to be known as "Andal", the girl who "ruled" over the Lord.

Andal Thiruppavai and Nacciyar Tirumoli
Andal composed two poetic works in her lifetime, both in Tamil. Even though she compiled the poems in her teenage years, they display a high level of literary and religious maturity. Her first work is known as Andal Thiruppavai. It is compilation of thirty verses, in which she imagines herself to be a cowherd girl who longs to serve Lord Krishna. The second compilation is known as Nacciyar Tirumoli, consisting of 143 verses. Through this poem, she disclosed her passionate yearning for Lord Vishnu.